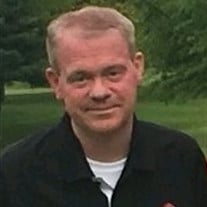 Clifford (Cliff) Edward Browne II, 49, of Columbus, Ohio, died peacefully on Saturday, August 21, at The Ohio State University Medical Center. Born July 4, 1972, in St. Louis, Missouri, Cliff was raised in Dayton, Ohio, Detroit, Michigan, Louisville, Kentucky and Findlay, Ohio. A practicing Catholic, Cliff was a graduate of Findlay High School and Miami University in Oxford, Ohio. He was a proud member of the Kappa Sigma Fraternity where he served as Fraternity Pledge Educator. He was an intern on Capitol Hill for Mike Oxley during both high school and college and upon graduation took a job working for Bob Taft. Cliff had a successful 25+ year career in Sales for Accor Hotels (Red Roof Inn), Extended Stay America, Dayton Park and Go, True Green and Fed Ex. A lifelong hockey player since grade school, Cliff later trained at Lake Placid Olympic Center to become a high school hockey referee and was often specifically requested for some of the most competitive high school games in Columbus. An avid sports fan across the board, he once won a TV for being the biggest sports fan in Ohio! He was a passionate supporter of his favorite teams: The Ohio State Buckeyes, the Columbus Blue Jackets, the Cincinnati Reds and the St Louis Blues. Cliff was a Columbus Blue Jackets season ticket holder since their inception, and he attended more than 250 Ohio State Buckeye home football games as well as countless other sporting events. Cliff loved nothing more than spending time with his friends who he considered to be family. He was elated to be a godfather and/or honorary uncle to many of their children. Some of his favorite memories were helping to coach, guide and mentor the next generation. He was always eager to help anyone less fortunate than him. A lifelong dedicated volunteer with many organizations, Cliff was especially honored to have recently been appointed as a CASA (Court Appointed Special Advocate) Guardian ad Litem and greatly enjoyed delivering Meals on Wheels to those in need. Survived by mother and step-father Anne Honaker Bolen and Dr. George Bolen of Potomac, Maryland; father Clifford Browne of Findlay, Ohio; brother John Bolen (Aurora Appel) of Hoboken, New Jersey; his longtime companion Joanne Feibel of Columbus, Ohio; dog Jacket; many aunts, uncles, cousins, nieces, nephews and countless friends, honorary nieces, nephews and godchildren. Cliff will be remembered by those who loved him as being fiercely loyal with an unparalleled sense of humor. He will be sorely missed by everyone who knew him. A Funeral Mass will be held at 11:00 a.m. on Friday, September 3, at Our Lady of Victory Church, 1559 Roxbury Road, Columbus, Ohio 43212. Family will greet friends immediately following the service until 1:00 p.m. The link to view the funeral liturgy for Cliff is https://vimeo.com/event/1252290. In lieu of flowers, please consider making a donation in Cliff's memory to: Life Care Alliance (Meals on Wheels) 1699 W Mound St, Columbus, OH 43223 (www.lifecarealliance.org) or Friends of CASA of Franklin County, 7652 Sawmill Road #154, Dublin, Ohio 43016 ([email protected] or Donate - CASA of Franklin County ). To share memories and condolences online, please visit www.schoedinger.com. Funeral arrangements entrusted to SCHOEDINGER NORTHWEST.

The family of Cliff E. Browne, II created this Life Tributes page to make it easy to share your memories.