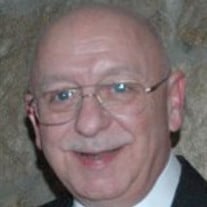 Stanley, Clarence Robert (“Uncle Bob”) 1947-2020 Clarence Robert Stanley, Jr. passed away on September 27th, 2020 at Riverside Methodist Hospital. Uncle Bob, as he was affectionately known, was born August 27th, 1947, in Charleston, WV to the late Clarence Robert and Birdy May Stanley. He graduated from West Virginia State University in 1969 and eventually settled in Columbus, OH where he worked as a long-time employee of Nationwide Insurance. Over the years he befriended many at Rocky’s, Fats Bar & Billiards, and Coaches, establishments that were like second homes to him. A Legend along the Bethel Rd. Corridor, Uncle Bob possessed a never-ending supply of humorous stories, tall tales, and Little Johnny jokes which would result in either raucous laughter or groans and head shaking. He was a first ballot inductee into the Bar & Wait Staff Tipper Hall of Fame (“Put that in your pocket.”). He was CEO, Artistic Director, and Lead Cameraman for Dümm Schitt Video Productions, the Audio/Visual company he founded to record events such as weddings, golf outings, and other festivities. He was a Past President and Grand Commodore of the Royal & Ancient Order of Malethbians, a fraternal organization near and dear to his heart. He was a fervent purchaser of As Seen on TV products, often expressing his disappointment with said products when they did not perform as advertised. Any product that Bob liked would often result in him buying not one but 10 or more, much to the puzzlement of the individual taking Bob’s order over the telephone who likely asked “You want how many???”. Areas of Bob's basement (where one could unwind at his bar, “Funny Feelings”) resembled what the Hanes for Men section at Kohl’s would look like had all the inventory been pressed and folded into meticulously stacked piles. The volume of drinks he bought for others over the years would fill an Olympics size swimming pool, a sizable layer of it made up of the Rumplemintz (“Gimme a check and a Rumpy’s.”) he’d buy for himself and anyone around who wished to join him for a Toast before he departed (“This stuff will make you see Double, think Triple, and make you take back things to Walmart you didn’t even steal!”). He enjoyed nothing more than bringing people together to watch an Ohio State football game, enjoy a brunch or dinner with friends, or celebrate one of his MANY “nieces and nephews” birthdays or weddings, where he would give a heartfelt and laughter inducing speech along with lavishing gifts and picking up tabs. Which leads to the Bigger Point of his Life: Uncle Bob was, hands down, one of the kindest, most thoughtful, and most generous people you will ever meet. It is simply incalculable the effect he had on the people he “adopted”, worked with, and met over the course of his life. Uncle Bob was an Encourager. A Mentor. A Friend who would be there for you if you needed something. And you knew it. There are far too many people to mention who deserve mention for who they were and what they meant to Bob over the years. You know who you are because Bob told you directly or by something he did for you. And he was always doing nice things for people he cared about. Dudes and Dudesses: Uncle Bob has left the building. Raise a glass for him. Say a Prayer of Gratitude for having known him. And please always remember the most important thing, something he said often in person, over the phone, or in emails and texts: “Uncle Bob Loves you!”. Bob is survived by countless friends, nieces and nephews, and cousins. Per Bob’s wishes there will be no service or calling hours. Also per Bob’s wishes there will be a Celebration Of Life event at Coaches (date and time to be determined). Please wear Uncle Bob RED and bring your favorite stories of this great man when that happens. It is asked that any donations people wish to make in Uncle Bob’s memory be made to The Columbus Zoo and Aquarium. Or to Little Johnny’s Education Fund

The family of Clarence "Bob" Robert Stanley, Jr. created this Life Tributes page to make it easy to share your memories.

Send flowers to the Stanley family.