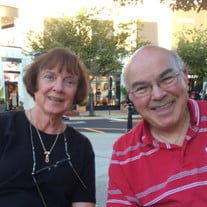 Dad, Papa, Uncle, Uncle Chocolate, Uncle Chuckles, Yoda. Amazing husband, father, father-in-law, grandfather, brother, uncle, and friend. Chuck grew up in the small town of Troy, Ohio. He graduated from Ohio State University and was a member of Phi Kappa Psi Fraternity. He served in the Army, stationed in Colorado Springs with Bee, and upon his discharge, returned to Columbus. Chuck charmed all who met him. He was generous to a fault and would always answer “yes” when asked a favor. He gave great advice, although his daughters would consider this advice “lectures” until they were older. He was an amazing story teller, with his hilarious sense of humor and quick wit. As his son-in-law said, the world is a bit less funny place now. We’re going to have to work harder. Chuck delivered papers, worked in a butcher shop, drove an ambulance, worked road crew for the city, washed dishes, was a bouncer for one night in the South Heidelberg bar, but was a salesman for most of his life. Traveling and meeting people was the attraction. New Orleans was a favorite territory where he ate oysters and developed a love for Dixieland Jazz at The Preservation Hall. Chuck loved Ohio State University sports, football most of all. He was who we all called on for stats, recruits, and anything else related to the Buckeyes. He always sported the scarlet and gray, but did add a Texas A&M hat when his granddaughter became an Aggie. Chuck was always active in his church, singing in the choir for many years. Music has always been a big part of his life, he played piano and sang from a young age. Chuck was preceded in death by his wife of 55 years, Bee. Chuck is survived by daughter, Anne (John) Hayes; daughter, Debbie Moffitt (Bryan Gates); grandchildren Caroline and Abby Hayes; sister Mary (John) Hanger and family; and many other nieces and nephews. Mass of Christian Burial will be held at 10 a.m. on Monday, July 19, 2021 at St. Andrew Catholic Church, 1899 McCoy Rd., with a reception following in the parish hall. In lieu of flowers, please consider a gift to Ohio Health Care Hospice. Arrangements entrusted to SCHOEDINGER NORTHWEST.

The family of Chuck Moffitt created this Life Tributes page to make it easy to share your memories.

Send flowers to the Moffitt family.