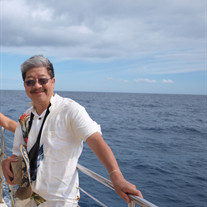 Cheng-Schen Huang, PhD, passed peacefully from hepatobiliary carcinoma while surrounded by family at home on December 30, 2021. He was born on September 1, 1937 in Taipei, Taiwan, the 5th of 8 children. With the passing of his father at a young age, he enjoyed the attention of a fiercely independent mother and a squad of nannies and cooks, spending time between the countryside and the city. After graduating college in Taiwan, he was the first of his siblings to venture forth internationally. With only $20 in his pocket, he headed to graduate school at the Free University of Berlin in Germany. His educational journey was not easy – aside from studying in a fourth and then fifth language, a beloved sister was tragically killed and his research papers were stolen, which eventually put him on the path to his PhD at Wayne State University. While researching physical chemistry, sparks flew when he connected with his future wife Cheryl in a chemistry class. After Cheng relocated to Columbus, Ohio for a position at Chemical Abstracts Services, he and Cheryl married in 1980. He worked at CAS for 31 years, where he edited research articles in four different languages: English, Chinese, Japanese, and German. He also became involved in the Columbus Taiwanese Association of America; having survived WWII and the aftermath of Taiwan being awarded to Nationalist China, he supported political activism to recognize Taiwan as an independent nation with his colleagues in the TAA. Cheng was a world explorer, whether it was traveling to connect with friends and relatives, hike in forests, snorkel in tropical waters, ride on trains in the mountainside or getting lost in his NatGeo magazines. His favorite destinations were anywhere near water so he could indulge in his daily swim. He was an artist and a candid photographer, often snapping unsuspecting family members or the occasional gross object, like a fungus or a red-eyed cicada crawling in his car. He had a keen eye for scene and detail and captured some of his favorite places in sketches, oil paintings, and travel journals. He could often be found "relaxing with his eyes closed" as Mozart or NPR pounded his car speakers, or having the "occasional" pre-workout nap in the parking lot of the Worthington Rec Center. He never missed a rendition of La Traviata, and his passion for music extended to the St. Michael's choir where he was a dedicated member for 20 years. He was proud of his daughters and was an attentive father, staying up late to help with homework, saving relevant articles for them to read, learning additional languages and instruments to help them practice, and offering unwavering support in all their ventures. His lifelong curiosity and thirst for knowledge are evident in the values he instilled in his daughters and the articles and notes that filled his phone. Cheng was a patient and wonderful listener, sometimes appearing quiet or reserved; however, to those who know him well, he had a quick wit and delivered punchy one-liners and esoteric advice with an infectious smile. He will be remembered warmly for his incredible generosity and thoughtfulness, offered to loved ones and strangers without fanfare. He was always looking for an excuse to treat friends and family to a good meal; anytime he met someone new he would say to Cheryl, "we need to take them to dinner." He loved experiencing different cultures through cuisine, and shared that love with others – stinky tofu and thousand-year eggs would often be served with the encouragement to "try before you cry!" but he was just as happy snacking on KFC, ramen, or dangerously old pickles. Cheng initiated family gatherings as often as possible, and much like the infamous "three-hour tour," Huang family dinners were legendary and never-ending. Cheers, Dad! We'll save you a seat. Cheng is predeceased by his parents, Chi-Hsiu Louis Huang and Jue-Pi Maria Chang; his son, Li-Che Huang; his brothers, Koon-Sang, Chiao-Sheng, and Shien-Shen; and his sisters, Chien-Huei Huang and Huan-Huei Tseng. He will be greatly missed by his spouse of 41 years, Cheryl Huang; his daughters, Elise Huang and Deirdre Huang (Justin Francisco); his brothers, Ming-Shen and Thomas, and their families; and his sister-in-law Li-Yun and family; as well as several generations of nieces and nephews around the world. Family and friends are invited to attend visiting hours from 1:00-3:00pm on Sunday, January 9, 2022 at Schoedinger Worthington, 669 N. High Street, Worthington, OH 43085. A Memorial Mass will be held at 10:00 am on Monday, January 10, 2022 at St. Michael Catholic Church, 5750 N. High Street, Worthington, OH 43085 and will be streamed online at Cheng-Schen Huang Funeral (boxcast.tv) Cheng will be interred at Gate of Heaven Cemetery in Silver Spring, MD across the way from his sister. In lieu of flowers and in honor of his love of sharing food with friends and family, please consider a donation to the MidOhio Food Collective, Local Matters, or the Worthington Resource Pantry. (https://give.mofc.org/Default.aspx?tsid=18866) (https://www.local-matters.org/donate) (https://www.worthingtonresourcepantry.org/donate)

Cheng-Schen Huang, PhD, passed peacefully from hepatobiliary carcinoma while surrounded by family at home on December 30, 2021. He was born on September 1, 1937 in Taipei, Taiwan, the 5th of 8 children. With the passing of his father at a young... View Obituary & Service Information

The family of Cheng- Schen Huang created this Life Tributes page to make it easy to share your memories.

Send flowers to the Huang family.