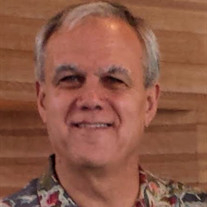 Charles Bayard Paschall, III, PhD passed away Saturday, September 19, 2020 at age 70 with his beloved wife of forty-nine years, Anne Miller Paschall, at his side. Bayard was born on November 19, 1949 in Wilmington, DE to Charles B. Paschall, Jr. and Barbara Carr Bispham. He was the eldest of their four children. Bayard was an extremely warm and generous human being who was gifted with so many natural talents that he excelled at everything and was loved by everyone. When he attended The Tatnall School in Wilmington, DE, he was elected president of the student council and played varsity football and ran track, specializing in sprint and hurdle events. Bayard’s other interests included racing Thistles on the nearby Delaware River, but his most enduring interest was a love of aviation. He became a certificated flight instructor and earned his commercial pilot and instrument ratings. After graduating, Bayard attended Tufts University in Boston, MA where he met his wife, Anne. They were married after graduation August 28, 1971. After a short stint in Charlottesville, VA, they moved to Columbus, OH so that Bayard could pursue a Doctorate in Immuno-Reproductive Physiology from The Ohio State University. They remained there the rest of his life raising their two daughters, Sarah and Hannah Paschall, while living across the street from Anne’s parents. Dolly and R.W. (Bud) Miller, Jr. loved living so close to Bayard’s family, and Anne appreciated how much Bayard helped her parents throughout their lifetime. Enjoying living across the street from one’s in-laws is an example of Bayard’s giving nature and his commitment to family. In 1980, Bayard started the first infertility clinic in Columbus Ohio with Dr. Nick Vorys and St. Anthony’s Hospital. Later he consulted for Serono/Biochem Pharmaceuticals in most of the hospital laboratories across the country. Next, Bayard pursued a career in medical data analytics and quality improvement in medicine and public health, including being the Chief of the Office of Quality Improvement of the Ohio Department of Mental Health. He then joined United Healthcare where he served in a similar capacity. Examples of his publications include a high school health textbook and an article discussing the results of a survey examining the connection between mortality and mental illness in the State of Ohio. However, what moved Bayard most was when a parent introduced a child that he had helped make possible. Bayard’s eclectic interests included travel, sailing, tropical fish and aquariums, theatre, cooking kayaking, fishing, birding (including banding birds), wood working, gardening, and photography. His favorite haunts were Burt Lake, Indian River, MI, Pelee Island, Lake Erie, Niagara-on-the-Lake (The Shaw Festival), St. Augustine and New Smyrna Beach, Florida. He always loved to share these interests and adventures with his family and dear friends and was grateful that he was able to visit Florida and Burt Lake one more time this last year saying “goodbye” as he left. His exquisite sense of design led Bayard to create a certified wildlife habitat and garden for his family at their home. It was a lifetime endeavor and is a testament to his commitment to the environment and nature and is a sanctuary for his family and friends (not to mention the local wildlife). Bayard is survived by his wife, Anne Miller Paschall; his daughters, Sarah and Hannah Paschall; his father, Charles Bayard Paschall, Jr.; his two grandsons, Matthew and Augustus Gargasz-Paschall; his three siblings, Barbara Paschall Southwood, Carolynn Paschall Keeter, and Edward Paschall; his sister-in-law, Janet Paschall; his son-in-law, Nate Gargasz; and his nieces and nephews. He was preceded in death by his mother, Barbara Paschall. In lieu of flowers, please make donations to National Public Radio, The Nature Conservancy, Burt Lake Preservation or the National Audubon Society.

Charles Bayard Paschall, III, PhD passed away Saturday, September 19, 2020 at age 70 with his beloved wife of forty-nine years, Anne Miller Paschall, at his side. Bayard was born on November 19, 1949 in Wilmington, DE to Charles B. Paschall,... View Obituary & Service Information

The family of Charles Bayard Paschall, III PhD created this Life Tributes page to make it easy to share your memories.