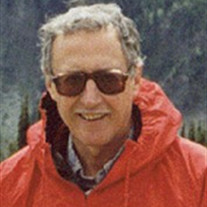 Charles Edward Corbató of Dublin (and previously Upper Arlington), Ohio, died July 28, 2021, at the age of 89. He was born July 12, 1932, in Los Angeles, California, and was the son of Hermenegildo and Charlotte (Jensen) Corbató. Survived by his wife of 64 years, Patricia (Ferg) Corbató; sister-in-law Emily Corbató of Plum Island, Massachusetts; children Steven Corbató of Portland, Oregon, Barbara Corbató (Martin Hogan) of Grand Rapids, Michigan, Susan Conrad (Glenn Voelz) of Bend, Oregon; grandson Andrew Corbató of Houston, Texas; and granddaughters Esi and Mansah Voelz of Bend. Predeceased by his parents and brother, Fernando José (Corby) Corbató. The son of a father who had emigrated from Spain via China and a mother who had survived the 1906 San Francisco earthquake and fire, Charles grew up in Los Angeles. He graduated from University High School in 1950 and later earned two degrees at the University of California, Los Angeles (B.A. 1954 in Geophysics and Ph.D. 1960 in Geology). He first taught at the University of California, Riverside and then at UCLA before moving to the Department of Geology at the Ohio State University in 1966. He soon was promoted to Professor and served as chair of the newly merged Department of Geology and Mineralogy from 1972 to 1980. In addition to conducting his own field research in California and Washington State, he enjoyed teaching field geology at undergraduate field camps in California (UCLA) and Utah (OSU) over parts of 24 summers. His most memorable geology field expedition came during the 1972-3 austral summer when he was a leading member of an OSU field party that worked and camped for seven weeks in Antarctica to map a remote section of the Transantarctic Mountain Range. At an elevation of 1,730 meters and just 550 kilometers from the South Pole, Mt. Corbató, the highest point in the Duncan Mountains, is named in his honor. At OSU, he served on numerous academic committees and was appointed Associate Provost in 1987. He retired from OSU in 1992. He was a life member of the American Geophysical Union and recognized as a Senior Fellow of the Geological Society of America. After his retirement from OSU, he worked for five years at the Ohio Board of Regents. In his younger years, he ran track as a sprinter in high school and later at UCLA. His love of mountains was fostered by childhood summers spent with family in Yosemite and later backpacking trips elsewhere in the Sierra Nevada with his older brother and friends. Charles continued to backpack and hike whenever he could, often with his son and grandson in mountains and canyons across the western states. In retirement, he volunteered for the Library for Health Information at OSU Medical Center and served as treasurer of the OSU Medical Center Service Board. In addition to his lifelong love of family, he enjoyed dogs, particularly the family's two cocker spaniels, Muffin and Milo. Throughout the arc of his long life, he made many lasting, meaningful friendships. For those wishing to contribute in his memory, please consider the School of Earth Sciences at Ohio State University (Charles E. Corbató Memorial Fund for Field Geoscience Education under fund number 317336 or ) or a preferred charity of one's choice. Respecting ongoing public health conditions, the family will hold a private memorial service on the morning of Tuesday, August 3, 2021. Friends and colleagues wishing to view this event online may send an email to [email protected] to receive remote participation information.

Charles Edward Corbató of Dublin (and previously Upper Arlington), Ohio, died July 28, 2021, at the age of 89. He was born July 12, 1932, in Los Angeles, California, and was the son of Hermenegildo and Charlotte (Jensen) Corbató. Survived by... View Obituary & Service Information

The family of Charles Edward Corbato created this Life Tributes page to make it easy to share your memories.

Send flowers to the Corbató family.