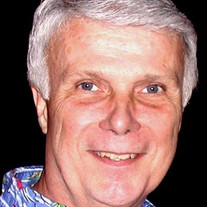 Charles “Chuck” Hedlund, age 75, transitioned to heaven on Tuesday, October 27, 2020 after a prolonged battle with idiopathic pulmonary fibrosis. Chuck was born in Des Moines, Iowa on Nov 30, 1944. He served his country in the US Air Force as an air traffic controller from 1965 to 1969. He worked for many years at Neumann Brothers Construction in Des Moines, Iowa, and owned his own successful business, Hedlund Custom Millwork, building custom furniture and cabinetry. He was later employed as the master craftsman/furniture builder at Wood Magazine/Meredith Corporation, retiring in May 2008. He moved to Columbus, Ohio in October 2008 to be near his beloved granddaughters. Chuck loved travel, classic cars, woodworking, and spending time with family. A perfectionist at heart, his craftsmanship showcased his talent and attention to detail. He is survived by his loving and devoted wife, Teresa, beloved daughter Amanda Hedlund Smith of Omaha, NE; his loving stepsons Brian Imholz of Jackson Mo. and Jeff (Erica) Imholz of Powell, OH; granddaughters Emmy and Josie Imholz; 4 sisters-in-law, 4 brothers-in-law, many nieces and nephews, cousins, close friends, co-workers and neighbors. He is preceded in death by his parents Harold and Dorothy (nee Buehler) Hedlund; and brother Robert Hedlund. The family wants to give special thanks to everyone near and far who reached out to express their condolences and share fond memories. The family requests that donations be made in his memory to the American Lung Association. Due to Covid restrictions, a Celebration of Life memorial service will be scheduled at a later date.

Charles &#8220;Chuck&#8221; Hedlund, age 75, transitioned to heaven on Tuesday, October 27, 2020 after a prolonged battle with idiopathic pulmonary fibrosis. Chuck was born in Des Moines, Iowa on Nov 30, 1944. He served his country in the... View Obituary & Service Information

The family of Charles "Chuck" Hedlund created this Life Tributes page to make it easy to share your memories.

Send flowers to the Hedlund family.