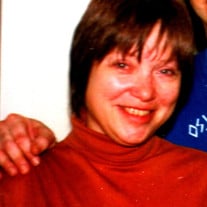 After a five-year struggle with Parkinson's disease, cancer of the stomach, and chronic respiratory ailments, Catherine Michael Tremper - formerly known as Catherine Dentan and Mildred Elaine "Mitzi" Snyder - passed away peacefully on June 27, 2021. She was 77 years old. Catherine was born in Providence, Rhode Island on November 1,1943 to Martha Frances (nee Watson) and Captain Paul C. Snyder, U.S. Army, then stationed in England. Because her father remained in the Army after World War II (he later served with distinction in Korea, rising to the rank of Lieutenant Colonel), the family moved repeatedly - from Chicago to St. Louis to Los Angeles - before returning to the Columbus area in 1954. As she was known then to her family and friends, Mitzi Snyder graduated from Bexley High School in 1961, enrolled in the Ohio State University, and met Manfred Knemeyer (d.2000). The two married, had one daughter (Erika, 1966 - 2019), and divorced in 1969. After graduating from Ohio State with a B.A. in Anthropology in 1969, Mitzi entered graduate school at the State University of New York at Buffalo. She earned a M.A. in Geological Sciences in 1976, specializing in clay minerology and went on to work as a geologist for the Carborundum Company of Tonawanda, NY (1976 - 1979) and Freeport Kaolin of Macon, Georgia (1979 - 1984). Following her second divorce, she legally changed her name to Catherine Michael Dentan in 1975. In the mid -1980's, Catherine returned to the Ohio State University as a graduate student, working as a graduate teaching assistant in various departments. While studying Russian history in 1985, she met Gary Tremper, another graduate student and teaching assistant in the Department of History. The two were marred in June 1998. Catherine earned an M.S. in Mining Engineering in 1988, and a Ph.D. in Geological Sciences in 1997. She briefly taught physical geology at Columbus State Community College (1995). Afterwards, Catherine worked for the Ohio State University: first as a post-doctoral researcher with the Department of Geological Sciences and Center for Mapping; later, as a research associate for the Byrd Polar Research Center. Her areas of research included economic geology, the structural geology of Greenland and Antarctica using satellite imagery and aerial photography, and glacial geomorphology using Remote Sensing and Geographic Information Systems. Catherine's field work in climate change took her to Greenland in 2004. She retired in 2006. Outside of work, Catherine's interests were wide and varied, ranging from martial arts to cooking to drawing to designing and making necklaces, earrings, and rosaries. She was an active member of Christ Church Anglican since 2006 and served on the vestry for many years. And, above all, she was a voracious reader. Beginning in 2002, Catherine lived in Hilliard with her husband Gary, an employee of Kimball Midwest. First diagnosed with Parkinson's disease in 2016 after several falls and injuries, she gradually lost her ability to walk, to swallow, and to speak. She underwent surgery for stomach cancer in May 2019. Catherine spent her last two years in nursing facilities - first Arlington Court, finally transferring to the Convalarium of Indian Run after her most recent hospitalization for pneumonia. Catherine faced her infirmities with a strong spirit, combining courage, resolve, faith, and a powerful will to live. Throughout her ordeal, she had the unwavering support of her family, her friends, and her Church. Catherine was preceded in death by her father (1987), her mother (1988), and her only daughter, Erika (2019). She is survived by her loving husband Gary; her granddaughter Alexandra (Lexi); son-in-law Ranislav Babic; both of Greenfield, WI; brother-in-law Wayne Tremper, and his wife Maureen, of Flanders, NJ; two nephews, Shane and Luke Tremper, and many, many friends. Family will receive friends 10-11 Saturday, July 10, at Christ Church Anglican, 43 W, Fourth Ave. Columbus, OH 43201, where a memorial service will be held at 11am. Private interment at Forest Lawn Memorial Park at a later date. Fr. Mike Cochran officiating. Arrangements by Schoedinger Dublin Funeral Home. Condolences may be sent to the family at www.Schoedinger.com . Family asks contributions to be made to the church in her memory.

The family of Catherine M. Tremper created this Life Tributes page to make it easy to share your memories.

After a five-year struggle with Parkinson&#39;s disease, cancer of...

Send flowers to the Tremper family.