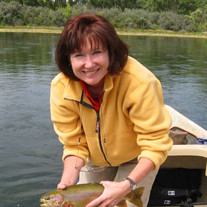 Carol Ann Hucks, 68, of Columbus, Ohio, passed away on October 15, 2020, from complications of gastrointestinal cancer. Carol was born in Michigan and moved to Central Florida with her family when she was a small child. As a teen, she loved her horse and her guitar and had a natural gift for music. Carol graduated from the University of Central Florida and later married her husband of 42 years, Frank Hucks. They shared a joy of the outdoors that they nurtured through boating, scuba diving, camping, and fly fishing. They passed their joy of nature on to their daughter, Audrey, through family camping adventures. In her early career, Carol excelled in a number of jobs from sales to bookkeeping until she felt called to advocate for others through the practice of law. In 1994, Carol graduated with High Honors from Rutgers Law School-Camden, where she was a Dean's Scholar. She then served as a judicial law clerk to the Honorable Michael Patrick King in the New Jersey Superior Court, Appellate Division, and to the Honorable Joseph H. Rodriguez of the United States District Court, District of New Jersey. Carol practiced law at New Jersey's oldest law firm, McCarter and English, LLP, and then worked as a staff attorney to the New Jersey Supreme Court. Carol volunteered in youth and teen ministry in her church throughout most of her working years and was a devout Christian. She blessed her friends and family through generous and unwavering prayer. Toward the end of her career, Carol treasured time with her husband at their cabin on Fishing Creek in Pennsylvania. Carol retired from her staff position with the New Jersey Supreme Court in 2013 and relocated with her husband to Lexington, Kentucky, and then Columbus, Ohio, to share in the upbringing of her granddaughters. She was a dedicated, loving grandmother to her three granddaughters and her "grand-dog-ter," Dagny. Carol loved improvising personalized songs for her granddaughters, reading to them, taking them on adventures to the zoo and the children's science museum, and wrapping them in hugs. Carol is survived by her daughter Audrey (Hucks) Sawyer and son-in-law, Derek Sawyer; granddaughters Ellie, Joanna, and Sally; step-daughter and step-son-in-law Elke and Steve Hannan, and a network of friends that reaches across the country. Carol was preceded in death by her husband Frank, parents Billy and Jean Osborne, and sister Glenna Osborne. In lieu of flowers, donations may be made to Young Life . A private service will be held for family and friends.

Carol Ann Hucks, 68, of Columbus, Ohio, passed away on October 15, 2020, from complications of gastrointestinal cancer. Carol was born in Michigan and moved to Central Florida with her family when she was a small child. As a teen, she loved... View Obituary & Service Information

The family of Carol Hucks created this Life Tributes page to make it easy to share your memories.

Carol Ann Hucks, 68, of Columbus, Ohio, passed away on October...

Send flowers to the Hucks family.