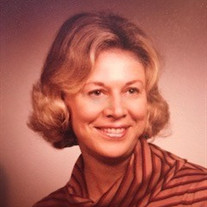 Carol passed away on December 30th in Phoenix, Arizona after a brief illness. She was 86. Born in Columbus, Ohio, Carol graduated from Bexley High School and attended Denison University where she received a Bachelor's of Arts degree in English. She was also a member of the Kappa Alpha Theta sorority. While Carol loved her time at Denison, she remained a loyal Buckeye and a life long fan of Ohio State University football. Carol's adventurous spirit led her to relocate to Phoenix, Arizona in the early 1960's where she had since resided. She worked for over twenty five years as Secretary of the Senate in the Arizona legislature. Following her retirement, Carol put her gregarious personality, quick smile, and love of Arizona to work for the Phoenix Convention Bureau, guiding visitors to explore the many attractions in and around the city. Carol devoted additional spare time to a number of local charities. It was her love of travel, forging new friendships and experiences that defined much of her life. Carol saw the world, visiting every continent except Antarctica, which she said was next on her list. Among her favorite places were South Africa, Vietnam, Australia, Tahiti, Mexico, Peru, and Hong Kong, to name a few. Throughout her life, Carol acquired a wide circle of friends who along with her family, will dearly miss her humor, energy, and conversation. Carol is survived by her two nieces, Linda A. Custer of Columbus, Ohio and Laura J. Allen and her husband Kenneth G. Lewis, both of Brookline, Massachusetts. She was the sister of the late Joan H. Allen and daughter of the late Robert H. and Mabel P. Hoffman. Carol's family would like to extend their gratitude to La Siena in Phoenix. Carol moved there last year and thoroughly enjoyed the facility, staff and residents. Carol's wish was to be put to rest next to her mother and father at Green Lawn Cemetery in Columbus, Ohio. A memorial service will be held in Columbus in 2021.

Carol passed away on December 30th in Phoenix, Arizona after a brief illness. She was 86. Born in Columbus, Ohio, Carol graduated from Bexley High School and attended Denison University where she received a Bachelor's of Arts degree in English.... View Obituary & Service Information

The family of Carol Hoffman created this Life Tributes page to make it easy to share your memories.

Carol passed away on December 30th in Phoenix, Arizona after...

Send flowers to the Hoffman family.