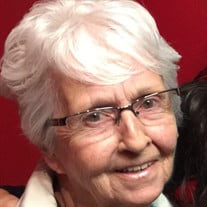 Carol Ann (Grim) Bramlage, 86, of New Albany, loving wife, mother, grandmother, great-grandmother, passed away on November 19, 2021. She was born in Dayton, Ohio on April 10, 1935 to Charles and Adelin (Fortman) Grim. In addition to her parents, Carol was preceded in death by brother Chad, husband Jim, daughter Tina, and son Matt. Carol was a Daytonian for 62 years and proud graduate of Julienne Catholic HS ('53). She and her husband Jim married in 1954 and raised their family on Polen Drive in Kettering. She was well-known as a very social person, who was a great listener, with a very unique laugh, and a positive attitude with a great smile, who did everything for her family. She built a very welcoming home, that always included the best drink and candy bar selection ready at all times in the refrigerator. Her love for babies was always special ("lit up" at the sight of one). Carol was often seen in card games at the kitchen table, or in card clubs with her friends, and doing ironing in the basement (Ironing Hall of Fame). After raising her children, she took up golf and played often in leagues with her husband and friends. After her husband passed, she moved to Raleigh NC (3 years), San Diego (10 years), and Columbus OH (her last 11 years). She was quite happy to be back in Ohio, where she made new friends in her new neighborhood as well as the "Young at Heart" group at the Church of the Resurrection in New Albany. She always stated how friendly people were in Ohio when she went to the grocery store, pharmacy, post office, gas station-which she visited most days probably to talk to people. Carol will be greatly missed by her sister Shirley (Bob) Guinta, sons Jim (Debbie) Bramlage of Canby, OR, Chuck (Venetia) Bramlage of New Albany, and Mike (Mirna) Bramlage of Grove City. She so loved her seven grandchildren: Zak (Abby) Bramlage, Nate Bramlage, Caroline (Ronnie) Rankin, Michelle (Niko) Cimmarrusti, Luke (Ege) Bramlage, Charlie (fiancée Elisabeth) Bramlage, and Jake Bramlage. She was so happy to have seven great-grandchildren: Nolan, Estel, Myrah Bramlage, Christian, Veronica Rankin, and Gianni, Lorenzo Cimmarrusti. The family wishes to thank the Villas at St. Therese/Mother Angeline McCrory Manor for taking such great care of Mom the last 5 years. She had a fond memory growing up with religious sisters. So later in life, she was thrilled to see them at her new home at the Villas. Sister Eileen and Sister Theresa, and their entire staff, gave Mom such tremendous love and care. Visitation will take place at CHURCH OF THE RESURRECTION, 6300 E Dublin Granville Rd, New Albany, OH 43054 on Thursday, December 2nd from 10:30am-12pm with Mass of Christian Burial to immediately follow. Arrangements entrusted to Schoedinger Northeast. Lunch will be provided at the Church Ministry Center. In lieu of flowers, donations in Carol's memory may be made to Villas at St. Therese, 25 Noe Bixby Road, Columbus, OH 43213.

Carol Ann (Grim) Bramlage, 86, of New Albany, loving wife, mother, grandmother, great-grandmother, passed away on November 19, 2021. She was born in Dayton, Ohio on April 10, 1935 to Charles and Adelin (Fortman) Grim. In addition to her parents,... View Obituary & Service Information

The family of Carol Ann (Grim) Bramlage created this Life Tributes page to make it easy to share your memories.

Send flowers to the Bramlage family.