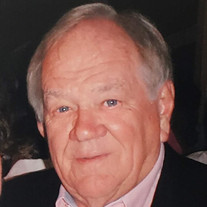 Carlton G. Horton, Jr., age 87, passed away Sunday, December 12, 2021. He was born on December 27, 1933 in Flint, Michigan to the late Carlton and Elfreda (Hastad) Horton Sr. Carl Horton’s pursuit of adventure brought joy and laughter to his many friends and family. A tenacious entrepreneur, mentor, and friend of many, Carl’s lasting influence on those who knew him is immeasurable. After service in the US Navy from 1952-1956, Carl moved to Columbus, Ohio where he worked as a sports car retail salesman and a volunteer fireman. In 1968, after years of research and development, he established The Horton Company, recognizing a need in the industry for better equipped emergency vehicles. Carl developed the first van ambulance, pioneering the transition from hearse-based transport. He also used his expertise in safety vehicles to form The Horton Safety Team, which brought an unparalleled level of care to the Indy Car racing circuit. With decades of metallic finishing and painting knowledge, Carl then founded Columbus Custom Powder Coating. In addition to other business ventures, Carl and his wife Judy, also served as ambassadors for the Central Benefits Insurance Company, where they traveled the country to entertain top employees and clients. His lifelong love of all things with wheels began as a young boy, a passion he pursued both professionally and personally. Carl collected and restored many cars and Harley-Davidson motorcycles for many years. He was an avid model builder, constructing hundreds of models in his lifetime. Carl was active in his community, serving on various Boards including the Children’s Hospital of Columbus and Star Bank. He was involved with YPO and WPO organizations and was a longstanding member of Scioto Country Club. Carl had a great sense of humor who loved people, a great listener and could entertain you for hours with his uproarious story telling. He was able to look at the “big picture”, dissect it, and come up with unique solutions to problems, which contributed to much of his success. Friendships were the most important assets he valued, and he worked hard to preserve as many as possible. He will be greatly missed by his wife of 35 years, Judy; his children, Tracey, Peter (Mary), Tim (Julie), and Heidi; his grandchildren, Nathaniel, Will, Reed, Anna, Emily, McCoy, and Lydia; his sisters-in-law, Nancy Grube, and Bobbie (Vance) Fritton; his niece, Julie (Dave) Hutt; and many other nieces and nephews. A special thanks to the OhioHealth Hospice, doctors, nurses, and aides, especially Charles, Melissa, and Beth. Friends and family are invited to a Memorial Service to be held at 2 PM on Monday, December 27, 2021 at SCHOEDINGER NORTHWEST, 1740 Zollinger Road, Upper Arlington, Ohio 43221, followed by visitation from 3-5 PM. The Memorial Service will be recorded and available through the Schoedinger website for those not able to attend in person. In lieu of flowers, friends who wish may donate to the Ohio Health Hospice, Columbus, OH. Online at: https://foundation.ohiohealth.com/programs/hospice-giving) or by mail at: OhioHealth Foundation, 3430 OhioHealth Parkway, Columbus, Ohio 43202. To share memories or condolences, please visit www.schoedinger.com.

The family of Carlton G. Horton Jr. created this Life Tributes page to make it easy to share your memories.

Send flowers to the Horton family.