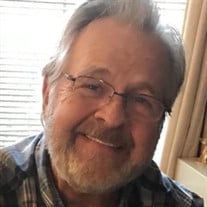 Carl Lee Tilley born November 19, 1944 went to join his heavenly father and wife Brenda on November 20, 2020. Carl was a dedicated husband, father, grandfather, and friend. After a short battle with cancer, he passed away peacefully surrounded by his loving family in Gahanna, Ohio. Carl was the son of the late John Tilley and Martha (Sauls) Tilley but was raised by his loving Aunt Margaret Bivens (Sauls) in Columbus, Ohio. Carl went on to enlist in the United States Navy in 1963, serving aboard the USS Shangri-La during the Cuban Missile Blockade and was in the Mediterranean during the Vietnam War. He later chose to be stationed in San Diego, California to be close to the love of his life, Brenda (Wolford) Tilley; they married in 1966 in Burbank, California. Carl left the United States Navy in 1967 with an Honorable Discharge. Thereafter, he and his new bride moved back to Columbus, Ohio in 1968. Carl and Brenda raised three wonderful children in Gahanna, Ohio; Vanessa (Tim) Roberts of Somerset, Ohio, Anita (Chris Miller) Pryor of Whitehall, Ohio, and Mike (Rachel) Tilley of Gahanna, Ohio. Carl leaves behind his siblings Georgia (Frank) Stover, Bonnie (Larry) Quinn, George (Linda) Tilley, and Drew (Jewell) Tilley. He will be missed by his grandchildren Alexander Nettles, Draven Tilley, and Chloe Tilley and his great granddaughter Avery Nettles as well as his extended family Olivia, Logan, and Timothy Baughman. He also cared deeply for his many nieces and nephews, other family, and many close friends. Carl made a living and supported his family by taking on contracting work. In his spare time, he deeply enjoyed hunting, fishing, and painting. He also believed in giving back to those in need and in 2013 began collecting toys for Mac’s Toy Drive in Beckley, West Virginia; driving several truckloads full of toys down each year to ensure that underprivileged children could have a Christmas. Calling hours will be held at Schoedinger Northeast Funeral Home, 1051 E Johnstown Road, Gahanna, Ohio 43230 on Sunday November 29, 2020 from 1pm-3pm. In compliance with Social Distancing guidelines, masks will be required for all attendees. Attendance levels will be monitored inside the visitation room. Carl's funeral service will be held at 11am on Monday, November 30, 2020 followed by interment at Mifflin Township Cemetery. Due to COVID-19 restrictions, attendance to the funeral service will be limited to family only- for those wishing to be present in spirit, a webcast will be available shortly before the funeral service begins, and can be found on his tribute wall.

Carl Lee Tilley born November 19, 1944 went to join his heavenly father and wife Brenda on November 20, 2020. Carl was a dedicated husband, father, grandfather, and friend. After a short battle with cancer, he passed away peacefully surrounded... View Obituary & Service Information

The family of Carl Lee Tilley created this Life Tributes page to make it easy to share your memories.

Send flowers to the Tilley family.