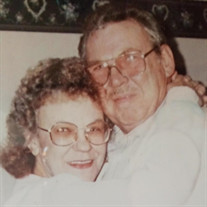 This webcast will take place on Wednesday, December 23, 2020 at 1:00 PM. Watch webcast for Carl E. Stewart: https://webcasts.lifetributes.com/1108774 Carl E. Stewart, 89, of New Albany, Ohio passed away December 17, 2020. He was born February 10, 1931 in Cabell County, West Virginia to the late George and Georgia (Jolly) Stewart. Carl was a very talented musician, having taught himself how to play guitar at the age of 15. He was a part of numerous bands that played in bars and clubs in the Columbus area. Carl enlisted in the United States Army at the age of 18. During his time in the service he was a part of building the Panama Canal. When he arrived home he married the love of his life Betty. He then began working as a roofer and a truckdriver. He was also a member of Amvets Post 89. In addition to his parents, he was preceded in death by his wife, Betty; children Rick Stewart, Debbie Wingate and Kevin Stewart; grandson Jason Hodge and siblings, Bud, Lee, Ray, Betty, Dorthy and Jean. He will be missed by his children Sherry Stewart Henry (Fred Lyday), Michael Stewart and Keith Stewart; grandchildren Ian Stewart (Tonya Groves), Trinity Holsinger along with great grandsons Shannon Holsinger, Cody Holsinger, and great-great-grandchild Elias Holsinger, Shannon York(Scott Boster)along with Liam Boster, Shawn Wingate, Selena Hodge along with Tyler (Alexa) Hodge and great-great-grandchild Paisliegh Hodge, Trent (Cassidy) Thomas, Sierra Thomas and Shane (Cali) Thomas, John (Kalie) Hodge along with Kobe, Alexis, and Maddix Hodge, Justin (Sara) Hodge along with Michayla, Grace, Madison and Brynlee Hodge, great-grandson Brandon Weber; brother Dave Stewart; extended family and friends. Family will receive friends from 4-7pm Tuesday, December 22, 2020 at Schoedinger Northeast, 1051 E. Johnstown Rd., Gahanna. Masks and social distancing required. Also, number will be monitored. A private funeral service will be held at 1pm Wednesday at the funeral home and will be available by webcast which is linked to Carl's tribute page. Interment to follow at Mifflin Cemetery. Those who wish may donate to the Wounded Warrior Project in his memory. There will be a dinner at Carl's home directly following the graveside service.

The family of Carl E. Stewart created this Life Tributes page to make it easy to share your memories.

Send flowers to the Stewart family.