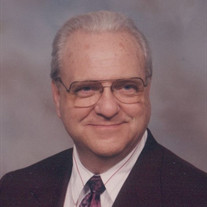 Rev. Bruce David Fisher, 87, of Grove City, Ohio, passed away Wednesday, August 11, 2021. He was born at home on April 19, 1934 in Williamsport Pennsylvania, the third son of Robert I. Fisher and Goldie I. (Franks) Fisher. He was baptized and confirmed at St. Lukes Lutheran Church in Williamsport. He attended Williamsport High School, Class of 1952, and was the Senior Class President; Lycoming College Class of 1956, and was the Senior Class President; Drew University Theological Seminary Class of 1959; Penn State University Graduate School 1963; and Boston University School of Theology 1988. Bruce actively served the Methodist Church for over 45 years, starting as a student paster at the Morris Charge of 5 congregations from 1953 to 1956 while a student at Lycoming College. He also served as Youth Minister at Roseland Methodist Church in NJ 1956-57, Student Pastor at Sanford St. Methodist Church in NJ 1957-59; Pastor as Pleasant Gap Methodist Charge of 4 congregations 1959-1963, Trinity Methodist Church in Danville PA 1963-64; Central PA Conference Director of Youth Ministry 1964-69; Assoc Director of Conference Program Council 1970-74, Senior Paster at St. Paul's UMC in State College PA 1974-80; Director Conference Council on Ministries in Harrisburg PA 1980-85; Chambersburg District Superintendent 1985-88; returned as Director on Conference Council on Ministries in Harrisburg 1988-95; Pastor of Faith UMC in Montoursville PA 1995-99; and retired on July 1, 1999. After retirement, he took interim appointments at Wesley UMC in Bloomsburg, Trinity UMC in Jersey Shore, Wesley UMC in Selinsgrove, and Wesley UMC in Bloomsburg as an associate pastor. Bruce met his future wife, Joan Carol Heisley, in 1952 while both were attending Williamsport High School and both served on the Student Executive Committee. He was president of the group and after scolding her for doing homework during a meeting, he walked her home to apologize. They dated while she attended the Williamsport Hospital School of Nursing. Bruce and Joan were married on June 18, 1955, in the Morris Methodist Church, one of five churches on the Morris Circuit, his first charge as a pre-ministerial student at Lycoming College. They honeymooned in Niagara Falls NY and Canada, returning home only after they had exhausted exactly half of their funds, leaving just enough for the return trip home. Though their 55 years of marriage, she always supported his ministry and the churches he served. Bruce is survived by his five sons, David J. Fisher of Williamsport PA, Stephen T. Fisher DO, and his wife Diann of Grove City, OH, Mark P Fisher, of Bellefonte, Pennsylvania, Paul C. Fisher and his wife Sylva of Ft. Worth, Texas, and Douglas W. Fisher and his wife Dawn of Houston, Texas; 11 grandchildren. He was preceded in death by his wife, Joan Carol Heisley Fisher, and his two brothers Forest and Marvin. In accordance with his wishes, private services will be held at a later date. Visit www.schoedinger.com to share a special memory or extend condolences.

Rev. Bruce David Fisher, 87, of Grove City, Ohio, passed away Wednesday, August 11, 2021. He was born at home on April 19, 1934 in Williamsport Pennsylvania, the third son of Robert I. Fisher and Goldie I. (Franks) Fisher. He was baptized and... View Obituary & Service Information

The family of Bruce David Fisher created this Life Tributes page to make it easy to share your memories.

Send flowers to the Fisher family.