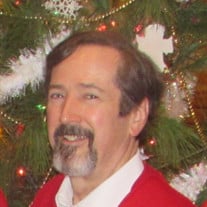 Bruce V. Alden, 70, of Worthington, passed away on September 30, 2020. He was born in Cheverly MD, on July 4, 1950 to the late Lorne and Elaine (Bennett) Alden. In addition to his parents, he was preceded in death by his sons, Adam Bennett and Andrew Muir; and his brother, Gary Bennett Alden. Having passed away two days following his 46th wedding anniversary, Bruce was able to spend his last moments with his four daughters and college sweetheart. Beloved for his sense of humor, Bruce knew the world was his audience and was often reminded he needed to be "Bruce Lite" around more sensitive groups. As a Nurse Anesthetist, he was often teased for his ability to talk his patients to sleep. Having come from an all boy family, Bruce gallantly traversed the childhoods of four daughters as his wife reminded him of basic parenting skills. Alongside his devotion to The Ohio State Buckeyes, he loved spending time outdoors working in the garden or playing disc golf, which coincidently was a nice time for him to escape the daily feminine banter within his home. Bruce taught his daughters the definition of hard work and perseverance after earning numerous degrees during his life. Bruce was also interested in his family's heritage as well as military history, which led to a love of collecting military memorabilia and miniatures. Always planning the next good home cooked meal, Bruce always appreciated the love his wife poured into every dish. After having ten grandchildren, Bruce was able to reconnect with his childlike nature and expanded his movie collection, which contains a generous sampling from each genre. He continued his tradition of writing his family truly artistic poetry for birthdays, anniversaries, and special holidays. Bruce will be greatly missed by his wife Susan Jane (Metzger) Alden; children, Gretchen Alden Ross, Andrea (Scott) Huffman, Jessica (Robert) Bilius, and Abigail (Matthew) Andres; grandchildren, Lexi, Tayler, and Caleb Ross, Sadie and Sydney Huffman, Wyatt, Landon, and Greyson Bilius, and Molly and Elijah Andres and numerous other family and friends. A public visitation will be held from 12PM until 3PM on Sunday, October 4th, 2020 at the SCHOEDINGER WORTHINGTON CHAPEL, 6699 North High Street. Funeral services will be private. This webcast will take place on Monday, October 05, 2020 at 10:55 AM. Watch webcast for Bruce V. Alden: https://webcasts.lifetributes.com/1093539

Bruce V. Alden, 70, of Worthington, passed away on September 30, 2020. He was born in Cheverly MD, on July 4, 1950 to the late Lorne and Elaine (Bennett) Alden. In addition to his parents, he was preceded in death by his sons, Adam Bennett and... View Obituary & Service Information

The family of Bruce V. Alden created this Life Tributes page to make it easy to share your memories.

Bruce V. Alden, 70, of Worthington, passed away on September...

Send flowers to the Alden family.