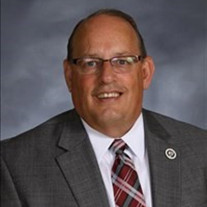 Brian Dale Hamler, 62, finished his ninth inning, after losing his battle with Idiopathic Pulmonary Fibrosis, on Tuesday, June 29th, 2021. He received wonderful care at both Grant Hospital and The OSU Wexner Medical Center. The family would like to thank all the exceptional nurses and doctors for their outstanding care. The youngest of five children, he was raised in a blue-collar family in Whitehall. His father (Butch) was a printer and volunteer police officer with the Whitehall PD. His mother (Mary) worked as a legal secretary in Columbus and Whitehall. Brian graduated from Whitehall-Yearling High School in 1977 where he excelled as an athlete in baseball and basketball. Brian began working right after high school at Agler-Davidson Sporting Goods on Hamilton Road. He also worked as a playground supervisor for the City of Whitehall in the Parks and Rec Department. Brian was an avid sports fan with a major love of baseball. He loved his Cincinnati Reds, Ohio State Buckeyes, Cleveland Browns, and, of course, his Whitehall Rams. Later in life, he learned to love the sport of archery where his son, Blake, excelled. He earned his Bachelor of Arts in Health and Physical Education from Capital University in 1981. While attending Capital, Brian was a standout pitcher on the Crusader baseball team. Upon graduation, he became a regular substitute teacher for Hilliard City Schools, Gahanna-Jefferson Public Schools, and Whitehall City Schools. In 1982, he was hired full-time by Gahanna-Jefferson Public Schools to teach elementary physical education. In 1985, Brian met his future wife, Wendy, and they married two years later. Wendy played softball for Whitehall-Yearling High School and Whitehall's summer rec program. Their combined talents brought them together on multiple co-ed softball teams where they destroyed the competition all over central Ohio. This inspired Brian to begin his baseball coaching career at Gahanna Lincoln High School and eventually became the head varsity coach for the New Albany Eagles baseball team. Brian furthered his education at The Ohio State University where he earned his Master of Arts degree in Educational Policy and Leadership in 1998. He was quickly hired on at Hawthorne Elementary in the Westerville City School District as their assistant principal. However, his heart remained in Whitehall. After just one short year at Hawthorne, Brian came back home and was named the Principal of Beechwood Elementary. After serving as Beechwood's principal through 2006, he was then promoted to Associate Superintendent and Director of Administrative Services at Whitehall City Schools. Always trying to improve himself professionally, Brian found an opportunity with South-Western City Schools. He was hired as their Director of Personnel where he was in charge of recruiting, hiring, mentoring, and professional development for the 5th largest school district in the state of Ohio. During this time, Whitehall was always in Brian's heart. He came back home for the second time to become the district's eighth superintendent in July of 2013. Whitehall City Schools, under Brian's leadership, accomplished many things such as opening the new Kae Avenue Early Literacy Campus, helping to pass the bond and permanent improvement levy in 2018, and initiating a new school-based health center with Heart of Ohio Family Health. Through the passing of the levy in 2018, students saw major improvements in the facilities at WCS such as a new wing for Rosemore Middle School, a new IT/Business Pathway at WYHS called Yearling U, a new synthetic turf football and soccer field, and improved HVAC components for Kae Avenue North. Throughout his entire career and everything he accomplished, being the Superintendent for Whitehall City Schools was the ultimate achievement and goal for someone who loved their community so much. His belief in the goodness of the community of Whitehall never once waivered. He always had a positive vision for what Whitehall could strive for and loved everything that Whitehall is currently. Ever the inspirational leader, Brian has countless family members, friends, colleagues, and supporters that were so touched by his kindness, his love, and his counsel. Brian is preceded in death by his infant daughter, Brittany; his parents Irvin "Butch" and Mary Hamler; his sisters Diana Tedder and Cheryl Strait. He is survived by his loving wife of 33 years, Wendy; his son, Blake; his brothers, Rick and Randy; his sister-in-law, Shari (Zach) Wright; his brothers-in-law, Bobby and Rayme (Heather) Benjamin; his father and mother-in-law, Bob and Janice Benjamin; and his many nieces and nephews. In lieu of flowers, any donations can be made to the Whitehall Education Foundation and/or the Whitehall-Yearling Alumni Association. Donations can be sent to the WCS Admin Offices at 625 S. Yearling Rd., Whitehall, OH 43213. A visitation will be held from 2:00 PM - 8:00 PM on Monday, July 5th, 2021, at Schoedinger Funeral and Cremation in Gahanna (1051 E. Johnstown Rd.). Funeral services will be at 10:00 AM on Tuesday, July 6th, 2021, at Schoedinger Funeral and Cremation in Gahanna (1051 E. Johnstown Rd.). Followed by burial at Forest Lawn Memorial Gardens, (5600 E. Broad Street).

Brian Dale Hamler, 62, finished his ninth inning, after losing his battle with Idiopathic Pulmonary Fibrosis, on Tuesday, June 29th, 2021. He received wonderful care at both Grant Hospital and The OSU Wexner Medical Center. The family would... View Obituary & Service Information

The family of Brian D. Hamler created this Life Tributes page to make it easy to share your memories.

Send flowers to the Hamler family.