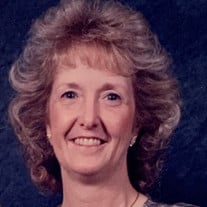 Bonnie Lee Rowland-Ray passed away at her home on January 28, 2021 after a long illness. She was 76. Bonnie was born on August 14, 1944 in Vancouver, WA to Alfred Kereli and Lois Liston Kereli. Around the age of 2 after the death of her father, Bonnie moved back to Ohio with her mother. Her mother remarried and had Carolyn, Bonnie's sister, who also became her best friend. Bonnie graduated from Linden McKinley High School in 1962 and then went on to get her cosmetology license at Nationwide Beauty Academy. In June of 1963, Bonnie married Michael Atkinson. They had 2 children, Bret and Gina. Bonnie later married for a 2nd time and helped raise her step-son, Dustin Rowland. After her children were grown, Bonnie married Richard Ray, who was the love of her life for 35 years. With Richard came a step-son, Chad Ray. Bonnie had the great joy of being a grandmother to Melissa, Taylor, Nikki, and Cody, and great-grandmother to Zane, Remington, and Ellie. When her kids were young, Bonnie worked for a short time as a beautician, and later worked in different administrative positions, finally retiring from Sum Total Systems. Bonnie loved life. All through her illness she had a fighting spirit and rarely let it get her down. She loved her family unconditionally and knew no stranger. She welcomed everyone that came into her home as if they were family. In her younger years, Bonnie enjoyed bowling and golfing, but it was with Richard that it didn't matter to her what she was doing as long as it was with him. They enjoyed riding bikes together, canoeing, walks out in nature, small trips here and there, and just going for long rides in the car. In addition to her husband, children, grandchildren, great-grandchildren, and sister, Bonnie leaves behind two nieces, Robyn and Jessica, several great nieces and nephews, and many cousins. Bonnie will be greatly missed by all. There will be a Celebration of Life planned at a later date. When that date is set it will be posted here on the SCHOEDINGER website.

Bonnie Lee Rowland-Ray passed away at her home on January 28, 2021 after a long illness. She was 76. Bonnie was born on August 14, 1944 in Vancouver, WA to Alfred Kereli and Lois Liston Kereli. Around the age of 2 after the death of her father,... View Obituary & Service Information

The family of Bonnie Rowland-Ray created this Life Tributes page to make it easy to share your memories.

Bonnie Lee Rowland-Ray passed away at her home on January 28,...