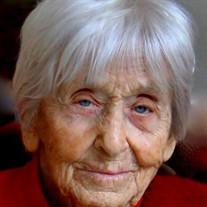 Betty Jean Brown (née Patterson) passed away peacefully on the morning of January 1st, 2021, following a protracted illness. She leaves behind a bounty of relatives and friends who loved her very dearly. Betty was born on September 24th, 1923, in Fulton County, Ohio, the third child of Robert Edward Patterson (1894-1972) and Alice Rose Barnes (1898-1951). She grew up on her parents' farm in Chesterfield Township, and worked the land from as young an age as she could remember. In high school, Betty excelled academically and athletically and was a pioneering member of one of Ohio's first interscholastic womens' basketball teams. Soon thereafter she met the love of her life Raymond Ellis Brown (1915-1978), and the couple married in Adrian, MI on December 24th, 1943. They made their home in Willis, MI, near Raymond's work at the Willow Run Bomber Plant. As a young woman, Betty had earned a scholarship to university but was unable to attend due to the economic impact of the Great Depression. She maintained a lifelong love of reading and learning and encouraged her children to pursue higher education. All four of her children would go on to earn graduate degrees, and two attained tenured professorships at leading universities. Born in the era of the horse and buggy, Betty famously never saw a mountain until visiting her son Larry in California whilst he was in college. Yet later in life, Betty embraced the opportunity to travel and visited France, Australia, Ecuador, Scotland, China, Puerto Rico, and many other faraway places. She made her last international trip at age ninety-four for her granddaughter's wedding in Ireland, where she earned widespread admiration for her optimism and youthful spirit. She was a longtime member of the Dearborn Garden Club and cherished the relationships she made there. Her gardening acumen was unrivaled, and her encyclopedic knowledge of flowering plants was widely known and often consulted. She enjoyed nothing more than sitting in the sun, reading a good book, enjoying a cool glass of lemonade, and admiring the beauty of her labors as a summer's breeze blew through her verdant and lovingly nurtured lilies, azaleas, irises, roses, delphiniums, hydrangeas, dahlias, bleeding hearts, and begonias. Betty was devoted to all nine of her grandchildren and helped to raise each at various points in their childhoods, a role that took her to Alaska, Oregon, Colorado, Michigan, Pennsylvania, and Ohio. Her last few decades were spent principally between Dearborn, MI, and Columbus, OH. She was an active member of Dearborn's First Presbyterian Church and a joyful resident at Worthington Christian Village in Columbus. Betty is survived by her brother Dale Patterson of Advance, NC, sisters Clarissa (Patterson) Barrington of Waynesboro, VA, and Virginia Patterson of Oregon, OH, children James Arthur Brown of West Bloomfield, MI, Susan Jeanette Barkeley of Oakland Township, MI, and Annette Louise (James) Beatty of Columbus, OH, and daughter-in-law Christine Persichetti Brown of Portland, OR. She is also survived by her grandchildren Stephen (Kate) Brown of Chicago, IL, Angela (Angus) Sutherland of Los Angeles, CA, Daniel Barkeley of Oakland Township, MI, Clare (Douglas) Berman of Los Angeles, CA, Shannon (Darragh) Hackett of Ballygawley, Northern Ireland, Alexander (Erin) Brown of Oakland, CA, Joseph (Alix Luntz) Barkeley of Los Angeles, CA, Linus Beatty of Columbus, OH, Zoe Beatty of Pasadena, CA, five great-grandchildren Elodie, Samantha, Ronin, Lee, and Isla, and numerous nieces and nephews. She was preceded in death by her parents, her son Lawrence Raymond Brown (1947-2020) of Portland, OR, sisters Rosemary (Patterson) Lind, Anna Belle (Patterson) Reed, brother John Patterson, daughter-in-law Julie (Ngyuen) Brown, and brothers and sisters in-law Harold, Don, Rex, Lola, and Isabelle. Betty also outlived her beloved husband Ray by forty-two years. But in all that time she never forgot his warmth, kindness, and love. For her children and grandchildren, the memory of Grandma Betty's generous and nurturing heart shall likewise live as long as we do. The family wishes to thank Hospice of Central Ohio for their compassionate in-home and inpatient care for Betty during her final illness. In accordance with her wishes, Betty is being cremated. Inurnment will take alongside her beloved husband Ray at Oakwood Cemetery in Saline, Michigan at a later date.

Betty Jean Brown (née Patterson) passed away peacefully on the morning of January 1st, 2021, following a protracted illness. She leaves behind a bounty of relatives and friends who loved her very dearly. Betty was born on September 24th, 1923,... View Obituary & Service Information

The family of Betty J. Brown created this Life Tributes page to make it easy to share your memories.

Betty Jean Brown (n&#233;e Patterson) passed away peacefully on the...