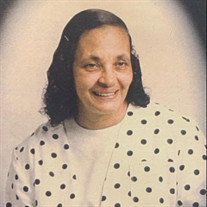 Bernadine Mills was an only child born and raised in Columbus, Oh. by the late Vincent and India Mills. Bernadine graduated from East High School, and this is the same place she met her husband, Dean (Demorris) Jordan who was also an only child. Dean had a stepsister named Emma Glanton who would soon become one of Bernadine's best friends. Bernadine and Dean married in 1953 at a young age and lived in various states because Dean was in the Navy. They were married for 19 years until his passing from cancer due to a military wound. Prior to Dean's passing she was a military wife. Due to his early passing at age 36 she had to take control of all aspects of her family life and learn to be an independent working woman. Bernadine worked various jobs at the following companies; Ontario, Rinks, and Edward's pharmacy for over 25 years where people grew to know her as "Mom". She was loved by all the patrons because of the respect and love she showered on each of them. She was a hardworking, dedicated employee who gave her all. Bernadine was a devoted Christian and mother of the church. She was always a thoughtful and giving person. She used to buy extra Christmas gifts and put them under the Christmas tree in case someone stopped by unexpected, she didn't want anyone to feel left out. She loved buying greeting cards for "all occasions" and would send them to family and friends for birthdays, holidays, or just to say "Thank you". She wanted to make sure she never missed an occasion. She rarely ventured from her habits such as attending church, watching her favorite shows, such as (In the heat in the night, The lifetime movie channel, and various game shows), going to the grocery store, and shopping at retail stores. She also loved crossword puzzles, and different workbooks. She believed in keeping your mind sharp. Bernadine was one of the strongest people I know, she had been through many many years of issues with her health constantly sending her to the hospital, but always managed to "fight the fight", stay positive, and keep her faith. Bernadine is preceded in death by India/Vincent Mills, Mary Jordan, John Cannon, Emma Glanton. Bernadine is survived by her four children Bonnie, Deanna, Dean, Beth Jordan-Booker (Lamonte), Grandchildren: Appassionata, Latoya, Derrell, Ramon, Barbara, Breanna, Malik, Great grandchildren: Chyna, Kenston Jr., Samone; Cora, James Glanton, Dante, Christian, Jordan. She is also by survived great great grandchildren, cousins, best friend Clem (Washington DC), family friends. Funeral Service will be held at 12 PM on Friday, December 3, 2021 at SCHOEDINGER MIDTOWN, 229 E. State Street, Columbus, Ohio 43215, where family will receive friend from 10 AM until time of service at 12 PM. Interment at Green Lawn Cemetery, Columbus, Ohio.

Bernadine Mills was an only child born and raised in Columbus, Oh. by the late Vincent and India Mills. Bernadine graduated from East High School, and this is the same place she met her husband, Dean (Demorris) Jordan who was also an only child.... View Obituary & Service Information

The family of Bernadine L. Jordan created this Life Tributes page to make it easy to share your memories.

Bernadine Mills was an only child born and raised in Columbus,...

Send flowers to the Jordan family.