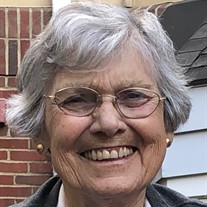 Bernadine Mae Hawksworth, 89, of Columbus, passed away on August 28, 2020. She was born in McKeesport, Pennsylvania, on May 5, 1931 to Joseph Mekis and Mary Valiknac. In addition to her parents, Bernadine was preceded in death by her husband, Donald Hawksworth; son, Donald Hawksworth Jr.; and brother, Edward Mekis Bernadine met her life partner, Donald Hawksworth, in 1949 at Peoples Pharmacy in East Liverpool, Ohio. The two were married for more than 70 years. During the early years of their marriage, Bernadine was a dedicated homemaker raising three boys. When the boys entered adulthood, she began helping Donald with his pharmacy business until it was relinquished to Rite Aid in 1988. A graduate of East Liverpool High School, Bernadine played the violin in the school orchestra. Her violin skills were good enough to earn her a spot in state competition. She was an avid reader. She also enjoyed sewing, crocheting and needle point. She loved college sports, especially basketball. A big fan of Ohio State football and basketball, Bernadine was also a fan of Duke basketball. She had a wish that one day Mike Krzyzewski would coach at Ohio State. Bernadine will be greatly missed by her children, Kim (Judy) Hawksworth, Philip (Colleen) Hawksworth; grandchildren, Benjamin Hawksworth, Amanda Hawksworth, Sarah Borgmann, Scott Hawksworth, Sarah Stoeckel, Andrew Hagans, and Elizabeth Gossage Funeral services will be private. Arrangements are being handled through the Schoedinger Worthington Chapel. In lieu of flowers, donations in Bernadine's memory may be made to the American Heart Association and Ohio Health Hospice at https://www.heart.org/?form=donate2 or https://www.ohiohealth.com/services/ohiohealth-at-home/hospice This webcast will take place on Monday, September 07, 2020 at 12:55 PM. Watch webcast for Bernadine Hawksworth: https://webcasts.lifetributes.com/1088006

Bernadine Mae Hawksworth, 89, of Columbus, passed away on August 28, 2020. She was born in McKeesport, Pennsylvania, on May 5, 1931 to Joseph Mekis and Mary Valiknac. In addition to her parents, Bernadine was preceded in death by her husband,... View Obituary & Service Information

The family of Bernadine Hawksworth created this Life Tributes page to make it easy to share your memories.

Bernadine Mae Hawksworth, 89, of Columbus, passed away on August...

Send flowers to the Hawksworth family.