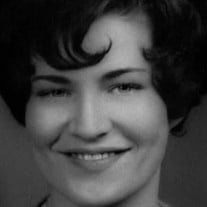 Barbara (Trytek) Ramey, born October 24th, 1947 and passed at home with her family and best friend March 13th, 2021. At Barb's request, there will not be a public viewing and the services will be by invitation to family and friends. Barbara was born in Syracuse, NY to John and Marion Trytek. She grew up with her four brothers Frank, Dan, Ray and Richard, before meeting the love of her life and best friend, Paul. Barb and Paul married April 30th, 1966 and had three children, Sue, Debbie, and John. The family lived in Syracuse (NY), Rochester (NY), Merrimack (NH), and Chicago (IL), but spent most of their lives together in Worthington (OH). Barb was an amazing mother to her children! Nothing made her happier than spending time with her family, and the people who knew Barb could not have asked more of her loving and special friendship. Barb's daughter Debbie married John Skuratowicz and the final years of her life were spent living with them and their son Blake in Lewis Center, OH. One of Barb's favorite things to do was travel to see her son John, his wife Tiffany, and their children Cooper and Nolan, in Texas. Her oldest daughter, Sue, unfortunately passed away in 2010, but not before having two children of her own, Emily and Ryan. Emily later gave Barb the gift of her great grandchild, Carson. There was nothing that brought more joy and happiness to Barb than spending time with her grandchildren and great grandchild. Barb loved playing games, watching movies, going to the zoo, and just spending time with her family and friends... especially the little ones! Barb influenced and touched the lives of everyone she met and her laughter and happiness was infectious! She was loved by many and she will be missed, but we all are thankful she is at peace and spending eternal happiness with her late friends and family.

Barbara (Trytek) Ramey, born October 24th, 1947 and passed at home with her family and best friend March 13th, 2021. At Barb's request, there will not be a public viewing and the services will be by invitation to family and friends. Barbara... View Obituary & Service Information

The family of Barbara Ramey created this Life Tributes page to make it easy to share your memories.

Send flowers to the Ramey family.