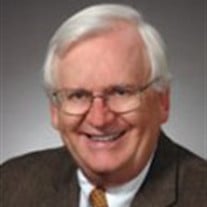 Arland "Art" Thomas Stein passed away peacefully in his sleep on Saturday, August 14, 2021. It was his 56th wedding anniversary. He was 82. Art was born on November 19, 1938 in Pittsburgh, PA to the late Thomas E. Stein and Josephine (Kiedaisch) Stein. He grew up in Hanoverton, Ohio helping run his parents' farm until he graduated from Salem High School in 1956. After high school, Art went on to Purdue University where he served as the president of the Acacia Fraternity. He was a member of Tau Beta Pi, the national engineering honor society. Art graduated from Purdue with a Bachelor of Science in Engineering in 1961. While at Purdue, Art met his wife Helen and they fell in love. After Purdue, he attended the University of Virginia School of Law and graduated in 1965. Art went on to have a long and distinguished career as an attorney practicing intellectual property and patent law starting as an associate at Blenko, Leonard and Buell in Pittsburgh, PA from 1965 to 1971, partner of Yeager, Stein and Wettach in Pittsburgh, PA from 1971 to 1974, partner at Reed Smith in Pittsburgh, PA from 1974 to 1999, partner at Barnes and Thornburg in Indianapolis, IN from 1999 to 2005, partner at Hahn, Loeser and Parks in Columbus, OH from 2005 to 2016 and lastly with Kegler Brown Hill + Ritter, also in Columbus, OH. Art was an attorney to the end. He was distinguished in Marquis Who's Who of attorneys. He was a published author. He was a loving husband, father and grandfather. Art will be deeply missed by his wife of 56 years, as well as by his sons, daughters in law and grandchildren. Art is survived by his wife, Helen (Horin) Stein; his three sons, their wives and seven grandchildren; Thomas (Becca) Stein, granddaughter, Maci; Dr. John (Latisha) Stein, grandsons, Jake, Nathan and Cole; and Attorney Christian (Vicki) Stein, granddaughters, Sabrina, Valentina, and Milena Stein. A private burial will be at Woodsdale Cemetery in Guilford, OH. In lieu of flowers, memorial contributions may be made to Acacia Fraternity Foundation, c/o: Purdue Chapter Fund, 12721 Meeting House Road Carmel, IN 46032.. Please visit www.schoedinger.com to share memories and condolences. Funeral arrangements entrusted to SCHOEDINGER NORTHEAST.

Arland "Art" Thomas Stein passed away peacefully in his sleep on Saturday, August 14, 2021. It was his 56th wedding anniversary. He was 82. Art was born on November 19, 1938 in Pittsburgh, PA to the late Thomas E. Stein and Josephine (Kiedaisch)... View Obituary & Service Information

The family of Arland "Art" Thomas Stein created this Life Tributes page to make it easy to share your memories.

Arland &quot;Art&quot; Thomas Stein passed away peacefully in his sleep...

Send flowers to the Stein family.