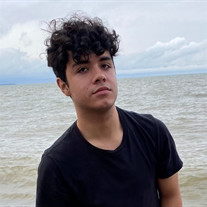 Antonio Vincent Rosa, born Antonio Cruz Velásquez Colón, age 17, passed away on August 13, 2021. The son of Constantino Velásquez and Esther Rosa (Colón), he was his mother's firstborn and eldest son, born on December 1, 2003, in Columbus, Ohio. Antonio's brilliantly shining light will be greatly missed by everyone who knew him. He was the vibrant kind of being that filled a room with more laughter, more music, more joy, and more mischief than his family previously knew. Antonio was passionate about life, family, helping others, music and flight. He was profoundly generous with his time and energy. He had become active in volunteer work by helping at the local homeless shelter and donating countless hours of hard work to friends and family. His career center aviation peers continue the work of bringing a local chapter of the Flying Musician's to their school, which was something Antonio was passionate about. Antonio was an avid lover of music. At age 14 he started taking guitar lessons at Rock Factory Studios. At age 15, he played his guitar for his aunt's wedding march. He continued to love playing guitar, wrote his own guitar music, and was also a self-taught pianist. Antonio was attending Pickerington North Highschool, and Eastland-Fairfield Career and Technical School for Aviation. He enjoyed playing football through grade school, middle school, his freshman year of high school, and participated in PHSN Youth Football Camps. Antonio had a genuine love for adventure, accomplishing more than most in his 17 years. In May of 2021 he earned his Remote Pilot Certificate (drone license) from Federal Aviation Administration, and his boater's license. He was actively working towards his private pilot's license and often took flight lessons at Sundowner Aviation where he was able to pilot his younger siblings' first flight. Antonio is preceded in death by his father Constantino (Tino) Velásquez; paternal grandmother Alba Martinez and paternal grandfather Constantino Velásquez; as well as his maternal grandfather Eligio (Leo) Colón. He is survived by his mother Esther Rosa (Colón) and the father of his younger siblings Joseph Rosa; maternal siblings Roman, Bronson, Victoria and Bianca Rosa; paternal siblings Kevin Xavier Velásquez Rodríguez, María Fernanda Velásquez Rodríguez, Samantha Judith Velásquez, Samuel Velásquez and Jennifer Hernández; his maternal grandparents Cyndy Winters and Charles (Beau) Davis; and his many adoring aunts, uncles, and cousins. His last act of selflessness on earth was to be an organ donor; his donation saved the lives of seven people. The aviation memorial scholarship ANTONIO'S AVIATION LEGACY has also been established for the Eastland-Fairfield Career and Technical School for Aviation in Antonio's name. In lieu of flowers please donate ANTONIO'S AVIATION LEGACY by venmoing @AntoniosAviationLegacy or emailing [email protected]

The family of Antonio Vincent Rosa created this Life Tributes page to make it easy to share your memories.

Send flowers to the Rosa family.