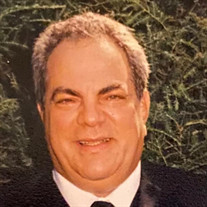 On November 22, 2021, Anthony “Tony / Anth” Michael Pancamo, passed away. He was born on November 1, 1946, All Saints Day, in Buffalo, New York, to Joseph Daniel and Florence Cecelia (D’Amico) Pancamo. The father (Big D), of Julie (Danny) Hofsas and Joseph D. Pancamo II, loving Papa to Skyler and Chase Hofsas and dear sister of Sarina Pancamo. In addition to his parents, he was preceded in death by his Brother, Benedict “Dick” Pancamo and second wife, Sandra Pancamo. Tony moved for work and family, living in 5 states and 8 cities. Through his travels, he never met a stranger. If you had a name tag on, he called you by it and in that moment he considered you a friend. He worked retail his whole life, spending the majority of his career at Genesco (originally Flagg Bros. now Journeys) and wrapping his career as an Assistant Manager at Walmart. Tony had several hobbies and interests. We best remember his love of HO model trains and the amazing displays he created while living in Kansas City and Buffalo. He found relaxation while watching his pet fish swim through their well- decorated aquarium and could identify each type and their characteristics. Like his fish, he also had a love of plants. He enjoyed learning about all varieties and how to nurture their growth. We flew kites, large with long tails, and lots of string and took long bike rides on warm summer evenings. He passed along his love of candles, teaching me to smell each one and only pick out the best scents and unique shapes. Always resourceful, he would then keep the leftovers and melt them down to make his own new creations. He took pride in his woodworking, carving, and painting of birds and even built a cradle for his grandkids. He loved food and was a master with a charcoal grill, which he swore was the best way to grill. He loved for a tasty “beef on wech” with a loganberry and maybe a piece (or two) of sponge candy for desert. He found a place in Arizona, when he lived there, that served these Buffalo “delicacies”. While his hobbies and interests evolved, one thing remained consistent, Tony was loving and kind. We will miss him most when we reflect on the times we knew him at his best. There will be no services In lieu of flowers, please make donations in Tony’s memory to the Aplastic Anemia International Foundation by going to https://www.aamds.org/forms/make-donation in support of other people like Chase.

The family of Anthony Pancamo created this Life Tributes page to make it easy to share your memories.

Send flowers to the Pancamo family.