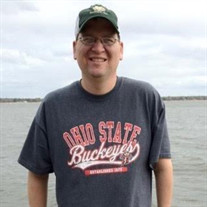 Anthony (Tony) Christopher Currier, age 52, a loving son, brother, uncle and friend passed away peacefully surrounded by his family on April 25th, 2021. He was born April 14th, 1969 in Middletown, Ohio to Leslie Charles Currier and Beverly Ann Graff. He graduated from Middletown High School and later attended The Ohio State University. Tony remained in the Columbus area and resided in Westerville, Ohio at the time of his death. Tony worked for Williams Lea and then for RICOH supporting the law firm of Baker and Hostetler for 18 years. He made many friends there during his years of service. Tony enjoyed many sports including golf, softball, basketball, and tennis. He loved euchre and poker as well. He spent many years organizing teams for softball and held monthly poker games with all his high school, college, and work friends. On poker nights all were invited because he appreciated the friendship, but also enjoyed taking their money. Tony's gourmet spread included pretzels and gummy bears. He would organize the nightly poker games when his family was all together as well and made sure he won. He was an avid Ohio State Buckeye fan and Cincinnati Reds and Bengals fan. He tried to never miss a game. He had a special place in his heart for all animals. He never met an animal he didn't want to give a treat to. Tony brought so much joy and laughter to so many people with his jokes and sense of humor, especially with his nieces, nephews and close family and friends. He also loved the Sunday night dinners with his large extended family and friends. Tony made many great friends throughout his life. He had lifelong friends from high school and college that meant a lot to him as well as friends he met at work. Tony is survived by his siblings, Kevin Charles Currier (Sarah), Michael Lewis Uleman (Pam), Anne Elizabeth Uleman, Todd Cameron Currier, and Les Charles Currier (Laura); father, Leslie Charles Currier (Mary); aunt, Barb Nunemaker (Ed); uncle, John Currier; nieces and nephews - Lanie, Kacie, Nate, Charlie, Miles, Ashley (Tyler), Hannah; great-niece, Ella; and countless friends. He was preceded in death by his mother, Beverly Graff Mullins, and grandparents, Marcia and Ernie Graff and Cora and Les Currier. A Celebration of Tony's life will be held on Saturday, May 15th, at Discover Christian Church, 2900 Martin Road, Dublin, Ohio 43017. Visitation hours will be from 10am to noon and a memorial service will be immediately following at the church at noon. In lieu of flowers, donations can be made to the National Kidney Foundation in Tony's name. Arrangements have been entrusted to SCHOEDINGER NORTHEAST FUNERAL HOME.

The family of Tony Currier created this Life Tributes page to make it easy to share your memories.

Send flowers to the Currier family.