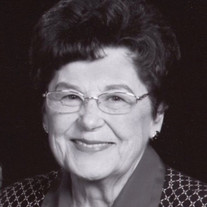 Anna Marie Dougherty, 85, of Gahanna Ohio, passed away peacefully in hospice on Wednesday, December 1, 2021, after a long battle with both dementia and heart-related complications. Anna Marie was born August 9, 1936 in Mauston, Wisconsin and was raised on a farm outside Mauston with her three sisters and brother. At 16 years old she graduated from Madonna High School, where she also met the love of her life and eventual husband of 62 years, Gene Dougherty. After graduation she worked several jobs in Mauston and then Milwaukee. Anna Marie and Gene were married on February 7, 1959, where upon they moved to Thorp, Wisconsin to begin raising their family and embark on Gene's lifelong career with Thorp Finance Corp. They lived and raised 5 children in Thorp for 17 years, where in addition to cherishing every part of motherhood, she absolutely loved playing in the weekly bridge club with her girlfriends. It rotated from house to house, where the kids would count the days to when she played host because it meant special candy and treats. The family moved back to Mauston for 2 years before relocating to Columbus, Ohio in 1978 for Gene's job, the place they would call home for the rest of her life. Over the past 43 years in Ohio, Anna Marie and Gene raised their children, and then enjoyed their grandchildren and great grandchildren endlessly. They loved attending the kids sporting events and beamed with pride over their accomplishments big and small. She lived her life with a selfless and sweet demeanor, an infectious laugh, a strong faith in God, and such a genuine love for family that she was endeared by everyone that knew her. She truly lived a wonderful life and will be forever missed. Anna Marie is preceded in death by her beloved parents Anton and Bridgie (Sweeney) Trepes, her sisters Blanche (Jack) and Agnes (Bob), and her first born son Doug who died at a very young age. She is survived by her loving husband Gene, and their children, Don (Anita) Dougherty, Dianne Brandel, David Dougherty, and Dan Dougherty; her grandchildren Courtney (Andy) Kirby, Haley (Price) Turner, Carson Dougherty, Cayden Dougherty, and Colton Hann; her great grandchildren Deacon and Henley Kirby, Adalyn and Lincoln Turner; her brother Bob (Colette) Trepes, and sister Delores (Ron) Zielinski. A public visitation will be held on Monday, December 6, 2021 from 11:30-12:30 at St. Matthew The Apostle Catholic Church, 807 Havens Corners Road, Gahanna OH 43230. A funeral service and mass will then be held at 12:30, with a church luncheon immediately following. Private burial will be held at a later date. In lieu of flowers, donations can be made to the Alzheimer's Association or to the American Heart Association.

Anna Marie Dougherty, 85, of Gahanna Ohio, passed away peacefully in hospice on Wednesday, December 1, 2021, after a long battle with both dementia and heart-related complications. Anna Marie was born August 9, 1936 in Mauston, Wisconsin and... View Obituary & Service Information

The family of Anna Marie Dougherty created this Life Tributes page to make it easy to share your memories.

Send flowers to the Dougherty family.