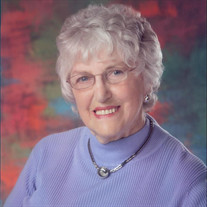 Angela Loretta (Kearney) Loe, 88, was called home to our Lord Jesus Christ June 30, 2021. Angela, "Angie", was a beautiful and loving wife, mother of five, grandmother of 10 and she will be missed greatly. Angie was born on October 26, 1932. She was raised in Springfield, Ohio, along with her two sisters and four brothers. She graduated from Catholic Central High School in 1950. She moved to Columbus, Ohio in 1953, after marrying her husband, Robert Loe. They enjoyed a wonderful life of 61 years together, until he passed away in 2014. Angie loved to sing, dance, and play the piano, especially for an audience! Among her many other talents were painting, decorating, jewelry making, and sewing. She loved to attend auctions, thrift stores, and garage sales, always looking for treasurers and always keeping the needs of others in mind. Angie worked as a secretary for most of her married life. She became a loan officer for the Department of HUD, a job she was extremely proud of, until she retired in December of 1992 at the age of 60. Throughout her lifetime, Angie was a member of Toastmasters International where she learned public speaking; a member of Altar Rosary Society, Decorative Artists League of London, and several choirs, including St. Patrick's Church of London, Ohio, Elderly United (1992-1994) and Western Electric (1967 - 1972). Throughout all her accomplishments in her lifetime, she cherished being a wife and mother the most. Angela is survived by her children Todd Loe, Andrew (Robin) Loe, Julie (Chris) Yoder and Jane (Rob) Loe; daughter-in-law Mary T. Loe, brothers Thomas and Michael Kearney and sisters-in-law Mary Beth Kearney, Lorraine Bryson and Mary M. Loe; her grandchildren Ben Loe, Ryan (Ashley) Loe, Beth (John) Moore, Danielle Loe, Nick Loe, Jacob Loe, Henry (Shayla) Loe, Amanda Loe, Joseph and Colton Hampton; and her first great-grandchild on the way. Angie has many more nieces, nephews and family. Angela is preceded in death by her beloved husband Robert Loe, devoted son Brian Loe, siblings Eleanor Corp, James Kearney, Barbara Jean Taborn and Paul Kearney. Family will receive friends on Thursday, July 8, 2021 at SCHOEDINGER NORTHEAST FUNERAL HOME, 1051 E. Johnstown Rd., Gahanna, from 4-7pm. A Memorial Mass will be held on Friday, July 9, at St. Matthew the Apostle Catholic Church, 807 Havens Corners Rd., at 10:00am. In lieu of flowers, please consider a donation to Mt. Carmel Hospice in honor of Angela.

Angela Loretta (Kearney) Loe, 88, was called home to our Lord Jesus Christ June 30, 2021. Angela, "Angie", was a beautiful and loving wife, mother of five, grandmother of 10 and she will be missed greatly. Angie was born on October 26, 1932.... View Obituary & Service Information

The family of Angela Loretta Loe created this Life Tributes page to make it easy to share your memories.

Angela Loretta (Kearney) Loe, 88, was called home to our Lord...

Send flowers to the Loe family.