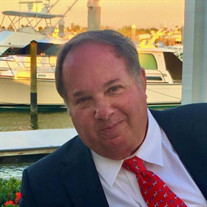 Andrew A. Dunn (Andy) passed away on Monday, February 15 surrounded by his adoring family. One could not find a more devoted, loving and involved husband, father or grandfather than Andy. He is survived by his wife; Diane Leahy Dunn; his daughters Barbara Cavalaris (Nick), Allison Calodney (Jason); his step daughters, Kate Jung (Matt) and Meghan Craver; and grandchildren Andy (19), Jake (16), Caroline (15), Lizzy (15), Henry (10), James (8), Teddy (7), Billy (7), Maggie Di (7) and Gus (4). He is also survived by his siblings Jim (Karen), Gardner (Yvette) and Nancy Byers (George) and generations of close and loving nieces and nephews. He is preceded in death by his parents; Donald G. Dunn and Mary Altmaier Dunn; and his brother, Bob. Andy grew up in Bexley and attended Columbus Academy and Sandford Prep in Wilmington, Delaware. He attended the University of Dayton and Ohio State University. Andy played an integral role in the growth of this family's business, Plaskolite, serving in many roles over his 43 years of leadership and service. Today, Plaskolite is one of the world's largest plastic sheet and polymer companies. He was a member of the Columbus Rotary and was an active board member of both Mental Health America of Ohio and the Salvation Army, where he received the Man of the Year award in 2016. Known for his big heart and generosity, he contributed to many local charities, including the Multiple Sclerosis Society, Melissa's House, and Franklin Park Conservatory. He devoted this time and resources to making life better for so many in his hometown of Columbus. Andy was blessed with many lifelong friends and cousins whom he loved to entertain at his home. Above all he cherished time with his family. He was an avid skier and tennis player, but his greatest passion was boating in Northern Michigan. As a young boy, Andy spent summers in the Les Cheneaux Islands. His love for the water, boating, snowmobiling, and sharing legends of Little LaSalle Island continued throughout his life. He enjoyed humoring his friends and frightening his children and grand kids. He was a masterful storyteller, whether it was one of his original creations or recounting memories he made with family and friends -- some of which you would not believe unless you were there. He was also a great listener; you could always count on him for a good joke, advice, or the occasional lecture. Andy lived life to the fullest and encouraged his loved ones to do the same. A celebration of his life will be at 1 PM on Monday Nov 29 at First Congregational Church, 444 E Broad Street. The family will be hosting a reception at Rocky Fork Country Club, 5189 Clark St Rd. following the service from 2:30 - 5 PM. The family welcomes donations in his honor to the Salvation Army of Central Ohio (www.salvationarmyusa.org ) or Mental Health America of Ohio www.mhaohio.org ). Arrangements by SCHOEDINGER MIDTOWN, 229 E State St. Columbus, OH 43215

Andrew A. Dunn (Andy) passed away on Monday, February 15 surrounded by his adoring family. One could not find a more devoted, loving and involved husband, father or grandfather than Andy. He is survived by his wife; Diane Leahy Dunn; his daughters... View Obituary & Service Information

The family of Andrew A. Dunn (Andy) created this Life Tributes page to make it easy to share your memories.

Andrew A. Dunn (Andy) passed away on Monday, February 15 surrounded...