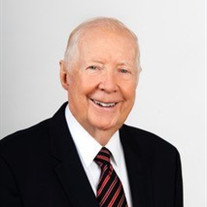 On September 23, 2021, Justice Andrew "Andy" Douglas passed away peacefully at his home in Dublin, Ohio with his beloved and devoted wife, Sue, at his side. The cause of death was idiopathic pulmonary fibrosis. Andy was born on July 5, 1932 in Toledo, Ohio. He graduated from Woodward High School in 1950 and from the University of Toledo College of Law in 1960. While in college, he was involved in student government activities and was an active member of the Alpha Sigma Phi Fraternity. He was honorably discharged from the United States Army with the rank of 1st Lieutenant in the 1st Infantry Division - The "Big Red One" and the Army Signal Corps. He began his law career in Toledo in the Law Office of Eugene Winchester and soon became a partner. In 1961, while handling a busy law practice, he was elected to the Toledo City Council becoming the youngest person to ever be elected. He was elected 10 consecutive times, served for 19 years and became known as the "Dean" of Toledo City Council. In 1980, he was elected to the Sixth District of Appeals (comprised of 8 counties in Northwestern Ohio). He served there until his election to the Ohio Supreme Court in 1984. He was reelected to the Ohio Supreme Court in 1990 and 1996. After serving for 18 years, he reached the mandatory retirement age of 70 and retired from his service to the State of Ohio. Andy resumed his law career and actively practiced until the time of his death. While sitting on the bench, Andy was an Adjunct Professor for the University of Toledo Community and Technical College and the Ohio Dominican College. He often served as a guest lecturer for undergraduate and law school classes and was a featured presenter at numerous seminars and conventions. Andy was a member of many boards and commissions and received many awards and commendations. He remained a member of the Columbus, Toledo and Ohio State Bar Associations. Andy had few hobbies but he enjoyed all things sports. For 15 years, he pitched for the Ohio Supreme Court softball team and always looked forward to the Thursday night games. On the field, he was just another player. He didn't hang up his glove until he was 70. He religiously followed and supported the Ohio State Buckeyes, the University of Toledo Rockets and the Cincinnati Reds. For years, he attended home games and also enjoyed traveling to away games. On game days, it was common for him to have two televisions going and be watching multiple games. Some days, he even turned on a radio! Andy found his true calling in the law. He never tired of discussing it. He spent a great deal of time in the past few years, responding to calls from judges and lawyers seeking guidance about a particular issue, case or rule. His memory for cases, statutes and rules and their applications was encyclopedic. He always told others that being on the Ohio Supreme Court was an intellectual feast every single day. He also said: "If you serve long enough, you will make everyone angry." One of his greatest joys and delights was engaging with and debating other lawyers, judges, staff attorneys and interns. There are countless amusing stories about Andy and his red pen. He is survived by his devoted wife, Sue. Also surviving are four children, Cynthia Reeves, Robert (Janet) Douglas, Andrew "Chip" Douglas and David (Nora) Douglas, 8 grandchildren and 10 great-grandchildren and his sister-in-law, Emmie Douglas. Andy was preceded in death by his parents, Andrew Douglas and Elizabeth Wilson Mair Douglas, his wife, Joan, his three sisters, Jean, Sadie and Elizabeth, and his brother, Bill. At his request, there will be no visitation, funeral or memorial service. Remember him as he lived. Andy lived his life by being able to say each night when he put his head on the pillow that "Today, I helped someone." If you want to honor him in some way, do so by helping someone today, tomorrow and the day after. Each day of his life, he strived to earn the words found in Matthew 25, Verse 21 - "Well done, good and faithful servant." Contributions can be made to the UT Foundation - Law Unrestricted Fund, 4510 Dorr Street, MS#820, Toledo, Ohio 43615-4040; OhioHealth Hospice - Central Ohio, c/o OhioHealth Foundation, David P. Blom Administration Campus, 3430 OhioHealth Parkway, Columbus, Ohio 43202 or The Salvation Army of Central Ohio, 966 East Main Street, Columbus, Ohio 43205. To share memories or condolences, please visit www.schoedinger.com . Arrangements entrusted to SCHOEDINGER DUBLIN.

On September 23, 2021, Justice Andrew "Andy" Douglas passed away peacefully at his home in Dublin, Ohio with his beloved and devoted wife, Sue, at his side. The cause of death was idiopathic pulmonary fibrosis. Andy was born on July 5, 1932... View Obituary & Service Information

The family of Andrew Douglas created this Life Tributes page to make it easy to share your memories.

Send flowers to the Douglas family.