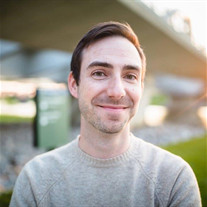 On Sunday, January 17, 2021, Andrew Cox, a loving husband, and father, passed away at the age of 35. Andrew was born on May 24, 1985, in Columbus, Ohio, to Bill and Janet Cox and was the cherished brother of Geoff Cox. He graduated from Olentangy High School in 2003. At Purdue University, he received his undergraduate degree in Nuclear Engineering in 2007, followed by his Master's in Aeronautical Engineering. Andrew began his career at Battelle in Columbus, Ohio, where he started as an intern and received a patent in 2018. He was most recently employed at Asymmetric Technologies. On March 4, 2017, he married Lauren Lipaj, and he was the deeply devoted father to Charlotte. Andrew had a passion for learning and music. In his free time, he could be found leisurely reading through an academic textbook. He was also a talented musician who played multiple instruments, and he was an especially talented guitarist. Some of his fondest memories from high school and college were the times he spent playing and performing with his band, The Iry. Although Andrew and Lauren attended high school together, they met during college through mutual friends. While they started as friends, you could instantly see that they were meant to be together, a perfect match. They loved spending time together outdoors, riding bikes on the Olentangy Trail, or hiking in Hocking Hills. They also loved spending time with their mutual friends, but above all, they just loved being together. In 2018, Andrew became a father to Charlotte. She was one of the greatest joys of his life. Andrew was an incredible father and often went above and beyond to ensure his family's wellbeing. He formed a very strong and special bond with Charlotte, who cherished his playfulness. Andrew often used his imagination and engineering skills to make Charlotte's world a magical place. Charlotte still lovingly refers to her father as "tickle monster." He will be remembered for his bright smile, his fun-loving personality, his inquisitive spirit, and his willingness to always be there to help his friends and family when they needed him. A private funeral service was held Thursday, January 21, 2021. Andrew was a life-long learner, so in lieu of flowers, we ask that you consider donating to help his daughter Charlotte continue her education through a college fund at www.gofundme.com/f/Charlotte-College or donate to The Andrew James Cox Foundation by going to www.columbusfoundation.org/the-giving-store and searching for "Andrew James Cox Foundation - 4177" which will provide grants to nonprofits and help honor Andrew's memory through furthering science education.

On Sunday, January 17, 2021, Andrew Cox, a loving husband, and father, passed away at the age of 35. Andrew was born on May 24, 1985, in Columbus, Ohio, to Bill and Janet Cox and was the cherished brother of Geoff Cox. He graduated from Olentangy... View Obituary & Service Information

The family of Andrew James Cox created this Life Tributes page to make it easy to share your memories.

Send flowers to the Cox family.