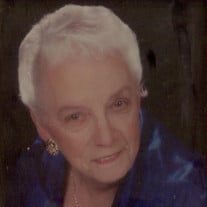 Alyce G. Stoops passed away on February 6, 2021. She was born on July 22, 1926 in Jeannette, PA to Irene Cooper Oden and Harry Jay Oden. Her early childhood years were spent in Williamstown, WV, before moving to Sisterville, WV, with her Aunt Nellie Oden Needs, who raised her. She graduated from Sisterville High School in 1944 and then attended Nursing school. She graduated from Camden-Clarke School of Nursing in Parkersburg, WV in 1947. Alyce attended through the Cadet Nurse Corps program that existed from 1943 to 1948. Alyce completed an affiliation in Washington DC for six months as part of her training program and received her RN in 1947. She then moved to Saint Louis to work at the city hospital for three years before returning to Williamstown to get married. Alyce married Joseph Lee Stoops Sr., also of Williamsburg on August 6, 1950. They moved to Columbus in 1951 and raised two children. She worked at The Ohio State University Hospital in the 1950s, but left Nursing to help her husband with his business, Stoops Dental Lab, by running the office. After the lab closed, she worked as a nurse for an Oral Surgeon practice in Columbus. The family moved to Medina, OH in 1970, where Alyce worked at the Medina Community/General Hospital and the Society for Handicaped Citizens of Medina County. Alyce lived in Medina until moving back to Columbus in 2005 to live with her daughter. In addition to her husband and parents, her sister Mary LaRae Oden Hill transitioned before her. Alyce is survived by her daughter, Alyce Lynne Stoops of Columbus; her son, Joseph Lee Stoops Jr., and his wife Kathy Tokes Stoops; granddaughters, Jennifer Lynne Stoops and Julianne Stoops, all of Cuyahoga Falls, OH; and brother-in-law, Dale Hill, of Marietta, OH. Numerous nieces, nephews, and many treasured friends also survived. The family is especially grateful for the Mount Carmel Hospice team including Chaplain Jerry, Kristine, Kate, KaDai, Lucy, Judith, Jennifer, and Shannon. Due to Covid-19 restrictions, a celebration of life will occur at a later date. Graveside Service will take place at Riverview Cemetery in Williamstown, WV in the Spring. In lieu of flowers, donations in her memory may be sent to Stratford Ecological Center, 3083 Libert Road, Delaware, OH 43015 or Mount Carmel Hospice, 1144 Dublin Rd, Columbus, OH 43215. The family will make a donation in her memory to the Camden-Clarke Foundation. SCHOEDINGER NORTH, 5554 Karl Road, Columbus, Ohio 43229 is very honored to serve Alyce's family.

Alyce G. Stoops passed away on February 6, 2021. She was born on July 22, 1926 in Jeannette, PA to Irene Cooper Oden and Harry Jay Oden. Her early childhood years were spent in Williamstown, WV, before moving to Sisterville, WV, with her Aunt... View Obituary & Service Information

The family of Alyce G. Stoops created this Life Tributes page to make it easy to share your memories.

Send flowers to the Stoops family.