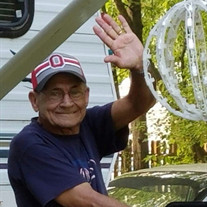 Alvin “Al” Clyde Moyers, age 78, passed away peacefully on Wednesday, June 30, 2021. He was born on June 26, 1943, in Speedwell, Tennessee to the late Florence Moyers. He is preceded in death by Great Grandmother & Great Grandfather, Grandmother & Grandfather, Mother, Uncles, Aunts, Brothers & Sisters. He is survived by his loving wife, Janet of 53 years; children, Chris Moyers and Cindy (Adam) Wimer; grandchildren: Ricky Sparrow, Tiffany Moyers, Nikki (Brandon) Blankenstein, Jess Moyers, Shane Moyers & Noah Wimer; sisters & brother: Lena York, Lou Claiborne, Mildred (Eddie) Mitchell, Sam (Lois) Myers & Ann (Glenn) Garner. Al was born in a corner of their country house on a working farm, in a holler between two mountains in Speedwell, Tennessee. He left the farm at 16 to go live with a sister in Dayton, Ohio. He worked in a warehouse, loading and unloading trucks, for the Duratile Co. Later he went to live in Kentucky with another sister and her family. In his early 20's, he moved to Columbus, Ohio and went back to work for Duratile, this time as a salesman at one of their retail stores and worked for them until they closed. In April of his 25th year, he entered a bar that he would frequently go to and there, he met Janet. A few months later, they were married on July 21, 1968. Soon after, he had his son Christopher (Chris), followed a few years later by his daughter Cynthia (Cindy), who was named after Al’s great grandma, Cindy. He and Janet lived in an apartment for 10 yrs. before getting their first and only house, to which he lived in until his last day, where he peacefully passed on to Heaven. He opened his own floor covering business and retail store with his wife in 1978, Moyers’ Tile. He worked very hard & loved doing remodeling with ceramic, wood, vinyl & carpet. To him, it was his personal artwork to each customer, and he made sure they were happy because it was his name on it. He was very proud of his family & provided a good life for them. He has been blessed with 6 wonderful grandkids. Al also loved camping, boating, fishing & bowling. Al was always willing to lend a helping hand to anyone in need. He loved spending time and doing things with his kids and grandkids. They would take an annual trip to Cedar Point in June and spend several days there, so that they could experience the entire park without the rush. They would also take a family trip back to his hometown in Tennessee to visit with family. Al got to celebrate his 50th Wedding Anniversary in 2018. He also enjoyed watching his favorite teams, the Bengals, Reds & Buckeyes. Al’s family will receive friends on Tuesday, July 6, 2021, from 6-8pm at SCHOEDINGER NORTH, 5554 Karl Road. There will be a Funeral Service on Wednesday, July 7, 2021, at 1pm. Interment to follow at Kingwood Memorial Park. Officiant Mike Peebles.

The family of Al Moyers created this Life Tributes page to make it easy to share your memories.

Send flowers to the Moyers family.