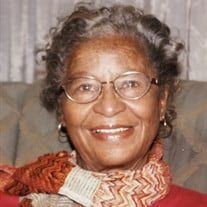 Watch webcast for Alice M. Roberts on Monday, January 4, 2021 at 12pm: https://webcasts.lifetributes.com/1110430 On Sunday, December 27, 2020, Alice Marie Roberts was called to her heavenly home. Her devotion to her family and her firm belief in God ultimately gave her peace. Alice Marie Roberts was born on May 24, 1931, to the late William and Bertha Brandon in Washington Courthouse, Ohio. She was preceded in death by her siblings: Margaret Byrd, Carolyn Roberson, Bertha Louise Card, Donna Wooten and William Brandon. Alice was the beloved mother of four children: David, Denise, Diane and Dana, who share fond memories of her. On October 3rd, 1975, she married Monroe Roberts Jr. After 17 years of marriage, “the love of her life” preceded her in death. Alice carried that deep love with her for the rest of her days. Alice worked for Doctors North Hospital for over 25 years. She had a strong commitment to help others and volunteered several years at John Burrough Elementary School. A respected pillar in the community, Alice was a resident on Wheatland Ave. for over 55 years. Alice loved to travel with her husband, sisters and friends, both domestically and internationally. Her passion for bowling spanned 25 years, which included winning tournaments in several states including Michigan, California and Nevada. She was also a member of the Les Belle Femme Social Club. Alice is remembered as a kind person with a warm heart, who never took sides- “right is right, and wrong is wrong” was one of her favorite sayings. She has left to cherish her memory, four children; David (Teresa), Denise, Diane, Dana (Pamela), along a host of grandchildren; Tera, Stephanie, Nathaniel, Tiana, Azure, Alicia, Tiffany, Shaunese, Taiilore, Marcella and Joshua, along with great grandchildren, great-great grandchildren, nieces, nephews, cousins along with extended family and friends.

Watch webcast for Alice M. Roberts on Monday, January 4, 2021 at 12pm: https://webcasts.lifetributes.com/1110430 On Sunday, December 27, 2020, Alice Marie Roberts was called to her heavenly home. Her devotion to her family and her firm belief... View Obituary & Service Information

The family of Alice M. Roberts created this Life Tributes page to make it easy to share your memories.

Send flowers to the Roberts family.