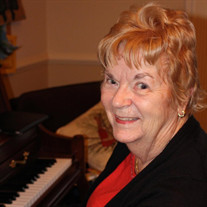 Aleta Lois (Hawk) Dean, 95, of Westerville, OH passed away on January 11th, 2021. Before moving to Westerville to be close to family, Aleta resided fulltime in Naples, FL for many years. She was born in Toledo, Ohio on April 12, 1925 to the late Edmond and Nina (Alford) Hawk. In addition to her parents, Aleta was preceded in death by her beloved husband, John William; and 2 of her 4 children, Jonathan Croy and Cynthia (Croy) Hermes. Aleta grew up in Bowling Green, Ohio graduating in 1943 from Bowling Green High School. She then attended Miami University in Oxford, Ohio where she received her Bachelor’s of Fine Arts degree in music in 1947. Aleta was a gifted pianist from a young age and as a young girl was asked to attend the Toledo Conservatory of Music. Her passion for music performance was combined with a teaching certificate allowing her to share her love of music with others. She taught music in Ohio, New Jersey and Michigan, spending much of her career as an elementary school music teacher. In 1967, Aleta obtained her Master’s Degree in Education from Wayne State University in Detroit, MI. She taught for the Warren Fitzgerald School District in Warren, MI for over 34 years before her retirement in 1983. After retirement, Aleta was a snow bird, living in both Ohio and Florida for several years before enjoying the warm Florida weather year around. Aleta was a member of the Order of Eastern Stars and Daughters of the American Revolution. She was also a life-long member of the United Methodist Church. She faithfully served as a church organist, pianist, choir director and choir member throughout her life. She treasured her Steinway grand piano and taught piano lessons well into her 70’s. Aleta also loved playing in the Hand Bell Choir and performing piano-organ duets with her life-long friend, Lorene Searfoss. Aleta performed and sang in the church choir until age 92. Aleta had a love of collecting antiques and glassware, and enjoyed reading in her free time. Among other things, Aleta had a passion for travelling. She loved to visit her children, grandchildren and great-grandchildren. After retirement, she travelled extensively throughout the United States, Europe, Russia, and Egypt. Aleta will be greatly missed by her children, Jerry (Elaine) Croy and Karen (Mark) White; daughter-in-law, Tanya Croy; grandchildren, Nichole Croy, Douglas (Natasha) Croy, Valentina White, Tyler White, Anna White, Melissa Packer, Valerie (Martin) Doolan, Jordan (Allison) Croy, Adam (Heather) Hermes, and Nathan (Nicole) Hermes; step-grandchildren, Nicholas Ferrao, Marissa (Kamil) Godlewski; 12 great-grandchildren; and numerous other extended family and friends. No funeral services are planned at this time due to the COVID pandemic. A Celebration of Life is pending for a later date.

Aleta Lois (Hawk) Dean, 95, of Westerville, OH passed away on January 11th, 2021. Before moving to Westerville to be close to family, Aleta resided fulltime in Naples, FL for many years. She was born in Toledo, Ohio on April 12, 1925 to the... View Obituary & Service Information

The family of Aleta Dean created this Life Tributes page to make it easy to share your memories.