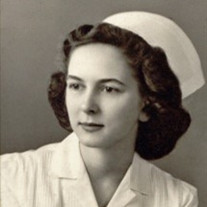 Agnes Theresa (Moffitt) Schmidt, age 96, passed away peacefully at The Grand of Dublin on November 13, 2021. She was born October 18, 1925, in Akron, Ohio to the late James P. and Mary Moffitt. She graduated from Akron St. Thomas Hospital Nursing School in 1946 and worked as Head Nurse, Springfield Mercy Hospital Emergency Room 1959-1969; RN at First Community Village 1975-1978; and RN at Nationwide Children's Hospital from 1978 until she retired in 1987. Agnes was a faithful Catholic throughout her life and was a parishioner at Saint Teresa Church in Springfield and at Saint Joan of Arc in Powell. She is preceded in death by husband, Joseph A. Schmidt, in 1959, daughter, Eileen M. Schmidt, and by three brothers and three sisters. She is survived by sons Robert (Marylou) Schmidt, James (Carol) Schmidt, Thomas (Deborah) Schmidt and William Schmidt; daughter Elizabeth "Renie" Moore; 16 grandchildren and 26 great-grandchildren; brother William (Patricia) Moffitt, and half-brothers Timothy and Michael Moffitt. Words can never express the gratitude that we feel for the sacrifices you made for us, including sacrificing your dream of medical school to give us as normal a homelife as can be had in a home without a father; for encouraging our own dreams; for saying no when it would have been easier to say yes; and for giving us everything we needed and, on occasion, things we didn't need but wanted. You taught all of us how to be good parents, responsible adults and loving partners to our own spouses. Thank you, Mom. We love you. Funeral arrangements will be announced at a later date. The family wishes to thank the dedicated staff of The Grand of Dublin for over three years of excellent care, as well as the nurses and caregivers of Kindred Hospice, who gave much comfort to Agnes and our family the last few days. A private gathering for family and friends will be held in the Vestibule of St. Joan of Arc Catholic Church, 10700 Liberty Road, Powell, OH 43065 on Tuesday, December 14 at 9:30 AM, to be followed by the Funeral Mass at 10:30AM. SCHOEDINGER DUBLIN is assisting the family with arrangements.

Agnes Theresa (Moffitt) Schmidt, age 96, passed away peacefully at The Grand of Dublin on November 13, 2021. She was born October 18, 1925, in Akron, Ohio to the late James P. and Mary Moffitt. She graduated from Akron St. Thomas Hospital Nursing... View Obituary & Service Information

The family of Agnes Schmidt created this Life Tributes page to make it easy to share your memories.

Send flowers to the Schmidt family.